Here’s an interesting graph from a new paper by Kenny Shirley and Andrew Gelman: 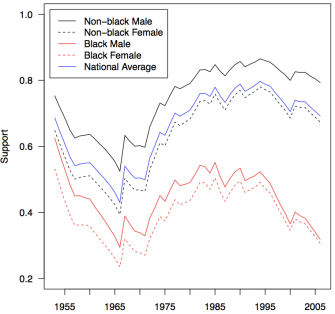 Perhaps the more interesting question concerns the difference between men and women in their support for the death penalty. White women support it less than white men and black women support it even less than black men, the group most threatened by the chance of execution. Generally men are far more likely than women to get the death penalty, so this is unlikely to reflect gender solidarity or an attenuated sense of self-preservation. Maybe women are, for some reason, more likely than men to notice that women almost never get the death penalty and to see that this is unfair. Or maybe women and men differ somewhat in their attitudes toward punishment.

This paper by Jonathan Haidt, John Sabini, Dena Gromet, John Darley on “What exactly makes revenge sweet? How anger is satisfied in real life and at the movies” [.doc] finds that women report taking a bit less satisfaction than men in avenged personal slights. But men and women don’t differ significantly in the fictional depictions of vengeance they find satisfying. It seems that Haidt, et al, predicted somewhat larger gender differences. Though not completely borne out, their grounds for the prediction are interesting, and perhaps account for some of the within-race gender gaps in support for the death penalty:

We also expected to find gender differences. Crick, Casas, and Mosher (1997), for example, found that when angry, boys are more likely to use physical aggression, while girls are more likely to use relational or emotional aggression. The writings of Gilligan (1982) and Tannen (1990) also suggest that women are more oriented towards personal relationships, and that they should be more sensitive than men to harm from relationship threats. Frodi (1978) and others have found that women experience more conflict over the expression of anger than do men. There is also evidence that male non-human primates have faster conflict-reconciliation cycles than do female non-human primates (de Waal, 1996). All of these findings suggest that angry episodes may be more interpersonally complex, more long-lasting, and less easily closed off by direct revenge for women than for men.

I kinda like the idea that men are more likely to find vengeance satisfying because they’re emotionally simpler. In the end, though, I suspect it’s just that men are slightly more bloodthirsty.

But, to get back to the graph, we shouldn’t lose sight of the fact that intra-race gender differences are trivial compared to differences between blacks and whites on this issue. Since blacks are most likely to be killed by the death penalty, and also most likely to be saved by the deterrence effect of the death penalty, I think I know what I might say in response to the question “What do black people think they know about the death penalty that what people don’t?” But if someone were to ask me “What do white people, especially white men, think they know about the death penalty that black people don’t?” I wouldn’t know how to begin. Any takers?

We evolved to be kind – and die for others.
▸
4 min
—
with
Paul Bloom
Up Next
Guest Thinkers

Last Thursday I recorded a bloggingheads session on Yemen with Afrah Nasser.  In the 43-minute video we talked about the current stalemate in Sanaa and what, if anything, can be […]