Right now, mother nature seems to be assaulting 3 nuclear sites in the United States, one at Los Alamos and two in the state of Nebraska, all within the same time period. The web, social networks and media are burning up with activity about the news of these events and will certainly put 2011 into the history books. A quick web search turns up thousands upon thousands of results including video, photos and reports.

A first page result on Google showed a series of conferences being held around the world to discuss how we can prevent these nuclear accidents from happening in the future. For example, the International Atomic Energy Agency (IAEA) recently held a five-day Ministerial Conference on Nuclear Safety in Vienna in late June focused on the events of Fukushima. The purpose of the conference: “To learn lessons from the accident and to strengthen nuclear safety.” Conference video and summaries can be found on the IAEA website.

Below are maps of the Commercial Nuclear Power Reactors and Research/Test Reactors that currently reside within the US. The maps were created by The United States Nuclear Regulatory Commission (NRC) and their website provides a myriad of additional content that may be of interest. 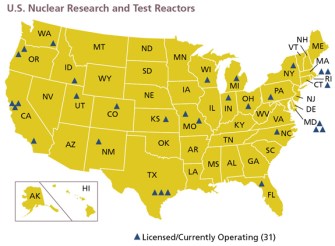 Three Simultaneous Nuclear Accidents: Is this a fluke, or is there something behind this?

This may indeed be a fluke but there is another theory. At present, the US is experiencing bizarre weather including tornadoes, historic flooding, and even massive forest fires. These floods and fires, in turn, are threatening our nuclear sites. There may be a thread that links all these together. Much of the weather pattern in the US is governed by the collision of cold, arctic air from Alaska and Canada that sweeps down due to the jet stream, with the moist, warm air from the Gulf of Mexico. The boundary where these two large air masses collide forms a corridor which cuts across the US, extending from Texas and the Southwest all the way through the Midwest and onto New England.

Right now, there are two disturbances in this crucial collision. The first is La Nina, which periodically generates cold air in the Pacific. La Nina is apparently distorting the jet stream, causing it to move further over the Midwest. But also, the Gulf of Mexico is heating up by about 2 degrees, carrying more moist air over the Southeast. So the collision of these two large air masses is largely responsible, many scientists believe, for the unusual weather, which is generating monster rain storms, tornadoes, and massive flooding, due to more moisture in the air.

But why are historic levels of tornadoes and floods being recorded? No one knows.

La Nina comes back every few years, so this cannot explain the “100 year floods” and “100 year tornadoes.” One possibility is that, on average, the Gulf of Mexico is carrying more moisture over the US, which could signal a historic change in our weather. This means that, on average, we could be experiencing not just “global warming,” but more accurately global swings, e.g. flooding in one area and droughts in another. If this is correct (regardless of where this warming is coming from) it means that we might expect more floods to happen simultaneously with forest fires, which in turn can threaten farmland, homes, and nuclear power plants.

If so, there are many lessons.First, we have to factor in the “100 year storm” in all of our large construction projects. Engineers can no longer ignore the 100 year storm just  because it will not happen in their life time or children’s life time. The 100 year storm seems to be happening sooner than we thought. This will, in turn, make nuclear energy much less attractive. Second, we might have more “unprecedented” nuclear crises due to historically bizarre weather patterns.

This could change our very way of life…. Get used to it.

Would We Want to Live in Plato’s Ideal Society?

Plato’s vision of a harmonious state would scandalize liberals and conservatives alike. But some of his advice might be worth taking.