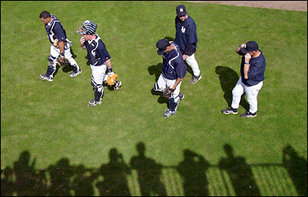 Today is the day that die-hard Yankee fans have been eagerly looking forward to since October – Pitchers and Catchers Day down in Tampa, Florida. As Spring Training finally kicks off, Yankees pitchers and catchers start arriving today,

– such as Derek Jeter and Jorge Posada – have already landed at the Yankee spring training complex, and over the next week or so, more of the big, high-wattage names will start filing in for another run at a World Series championship. (Sorry, Red Sox fans)

This is the first off-season in recent memory that the Yankees have not spent on some big, expensive addition (e.g. Giambi, Matsui, Johnson, A-Rod, Damon) to bolster a championship-quality team. Instead, the Yankees went for a strategy of “addition by subtraction,” as they got rid of negative influences like Randy Johnson, Gary Sheffield and Jaret Wright (good guy, but always hurt). The Yankees also are leaning on a brand new crop of youngsters – like Melky Cabrera and a group of new fireball-throwing arms – to make a significant addition this year.

Which all goes to show that organizational DNA matters. It matters in baseball, and it matters within corporations. Simply putting together a bunch of angry all-stars will not win a World Series — something the Yankees are starting to learn. Likewise, simply putting together a bunch of business all-stars will not make a corporation more innovative. It takes a careful and judicious mix of talent and an appreciation for the types of traits that lead to innovative thinking.