Despite the important role of the arts in enabling public expression, learning, and participation relative to science, there is an unfortunate tendency to think about the relationship in terms of “two cultures” divided. This metaphor has come to dominate discourse about science and society more generally.

Yet as an international exhibit opening this month at the Oxbow Museum in Edmonton, Canada demonstrates, there is far more potential for collusion than collision between artists and scientists.  Perceptions of Promise: Biotechnology, Society and Art is an interdisciplinary and collaborative project that brings together a group of internationally recognized artists and social commentators (e.g. philosophers, sociologists, legal scholars, scientists) in order to produce a body of original art work and accompanying essays exploring the complex legal, ethical and social issues associated with advancements made in life science technologies with a particular focus on stem cell research.  The initiative is organized by brothers Tim and Sean Caulfied, Canada Research Chairs in Law and Art at the University of Alberta. [Sean’s work is pictured at top left of this post.  See more of his work here.]

The project launches this month with a major exhibition at the Oxbow scheduled through March and will be followed by the publication of an edited volume featuring the artists’ work along with essays from social commentators. Canada’s Globe and Mail newspaper has called the exhibit a “Must See for 2011.”  For a preview of several of the essays, see the inaugural issue of Eighteen Bridges, a new Canadian magazine devoted to narrative journalism based at the University of Alberta.

I had the great opportunity to participate in a collaborative workshop based on the initiative last spring and contributed an essay to the volume reconsidering the depiction of science in film and television. [I will have more on this topic later this spring.]

The project’s Web site captures the collaborative intersections that exist between science and art. Too often art is viewed instrumentally by science, as a vehicle for gaining public support or promoting science.  This is unfortunate.  Science and art should be viewed as cultural equals with art an important expression of public appreciation but also concern over the nature and consequences of science.  As the project’s site describes:

Art has an important role to play in the discourse around biotechnology because it can offer unique articulations of the complex, polarized and often emotionally charged responses the public has towards technology. When engaging in this kind of critical dialogue, however, it is crucial that artists and the public are properly informed by the sophisticated and rich research occurring in the biomedical and scholarly world. Perceptions of Promise: Biotechnology, Society and Art offers viewers a compelling glimpse into a unique collaboration between scientists, scholars and artists, in a visually engaging exhibition that challenges viewers to consider positive and negative possibilities of biotechnology and stem cell research.

Below are two photos from the exhibit. 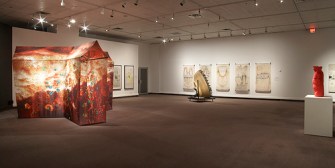 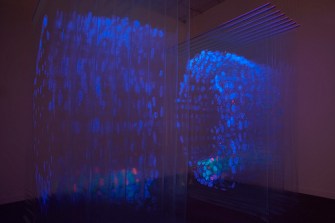 Disciplines Exchange on Ideas on Art, Culture, and Science

Reconsidering the Image of Scientists and Science in Film

Six Scenarios for an Axis Invasion of America

As presented by Life Magazine to its anxious readership in 1942.