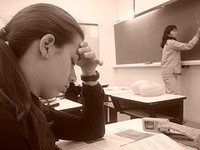 I think that pretty much sums it up for our students, doesn’t it? It’s not that they don’t want to work hard. It’s that they don’t want to expend too much energy on work that isn’t meaningful. When we see reports of rampant plagiarism or tales of students who want to do as little as possible in order to get a grade, isn’t that an indication that they’re doing work that’s not meaningful to them? When students are working on something that they’re passionate about, rather than apathetic, don’t most of these so-called generational ‘values’ or ‘character’ issues disappear?

Contrary to what many believe, our students don’t want to just get by. They just want better work.

Image credit:Waiting for time to pass

Are we edubloggers too harsh on our kids’ teachers?

Will Richardson and Alec Couros are frustrated with their kids’ teachers. Lee Kolbert pushed back. Gary Stager chimed in too as did many others in the various comment areas.nI greatly […]