“I felt if the Cairo museum is robbed, Egypt will never be able to get up again.” — Zahi Hawass. Egypt is in the midst of an uprising against 30 years of repressive rule and a flawed, corrupt governmental system, blocked avenues for political participation, and low employment and wages. This uprising closely follows the Tunisian revolution and is potentially one in a series of revolts and movements in the MENA region– and perhaps in other regions, as well– to fight for rights and the freedom to exercise self-determination and build livable societies.

Very soon into the revolt, the Egyptian government took the drastic step of shutting down access to information and communications systems (save landlines). As of this writing, reports are that all access to servers and mobile phones have been shut down, as well. Rather than inhibit protest, this has coincided with and may have added impetus for a swelling of protest, with people gathering en masse in the hundreds and thousands. (The extent to which this is a tech or a social media revolution has been debated by commentators for days– and will continue to be so. But similarly to what I’ve written before, for the moment this argument, while worth studying in the abstract, is besides the point.) This fight is playing out on the streets. The protesters are fighting no matter which technologies are available, willing to put themselves at risk to protect what is important to them. And one of the things they took to the streets to protect was their museums.

One of the most enthralling moments happened when images started circulating through AlJazeera and social media of protesters forming a human chain around the Egyptian Museum in Cairo. 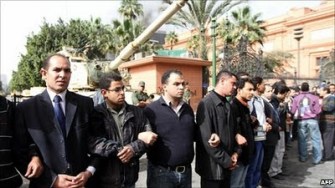 Archaeologist Zahi Hawass said, “all the inspectors, young archaeologists, and administrators, are calling me from sites and museums all over Egypt to tell me that they will give their life to protect our antiquities. Many young Egyptians are in the streets trying to stop the criminals.” The sight of people committing themselves to possible harm in defense of what is on the one hand a series of inanimate objects and on the other, the cultural legacy of millennia, touched the hearts and minds of people across the media universe. As Thomas Campbell, Director of New York’s Metropolitan Museum of Art, stated said, “If [the Egyptian Museum] is damaged through looting or fire, it would be a loss to all humankind.” 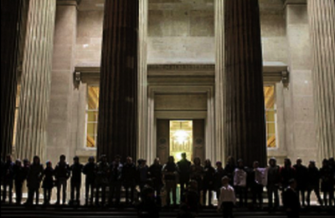 (Standing in solidarity at the Really Free School, London)

The Museum was, however, looted and reports started to trickle out of institutions around the country being robbed and vandalized. Whether these sackings were an expression of rage or seizing an opportunity to grab gold and treasures, they’re more likely to be the acts of thieves and looters and not acts of politico-cultural destruction akin to the bombing of the Buddhas of Bamiyan or the siege of the National and University Library of Bosnia and Herzegovina. This didn’t make reaction any less swift and poignant.

What makes these reactions particularly noteworthy is how deeply universal and human was the choice to protect the institutions, in the midst of all the unrest and chaos. The cultivation and preservation of cultural heritage–no matter how varied that heritage may be in modes of expression across societies–is a concept most individuals and societies understand (even if it is not always afforded concrete support). Our modes of cultural expression are contoured, dynamic signifiers of our cultural identity. The means by which we–as communities, cities, regions, countries or groups of individuals–express ourselves, and the means by which we distribute, curate and preserve that expression are essential elements of how we forms our societies.

Rebuilding, regeneration and revitalization, then, are all deeply tied to cultural identity. As the revolt wears on and the protests grow stronger in Egypt and potentially around the world, those of us who think about social innovation and transformation should think more deeply and constructively about the role that cultural expression and heritage play in creating societies that are fair, just and stable, and tailor efforts to incorporate cultural identity in concrete ways.

I have to note here that historian and archaeologist Alex Joffe has written a piece castigating Zahi Hawass’ quest to repatriate Egyptian antiquities as “misguided or at least poorly timed,” and calling into question the intentions of a “vast, impoverished underclass” that “seems less taken with either the nationalist narrative of Egyptian greatness that stretches back to the pharaohs, or the intrinsic value of antiquities for all humanity, and more intrigued by the possibility of gold and other loot.” I am regrettably not informed or qualified on the issues surrounding repatriation and preservation to weigh in on this line of the argument, even while acknowledging that these issues must be dealt with if considering cultural heritage as an element of societal rebuilding. In this post, though, I’m drawing a point about the intersection between culture and post-conflict reconstruction and–taking exception to the term “underclass”–Joffe’s second point about this demographic does intersect that notion, particularly in terms of the ability of a society to support both the needs and priorities of its community, while broadening a national narrative to include all members regardless of economic status.

Whatever stage of economic development a community is in, culture is an essential building block, just as important to progressive and actualized societies, as technology, governance, finance and the other “hard” elements. Tunisia and Egypt could represent clear points in a global revolution in politics, technology, finance, media, culture. It is too early to predict where we as a global community are headed, but what is clear is that almost nothing in our current systems and structures will remain the same. The hard work of fighting for or ensuring rights and creating livable communities doesn’t go away after protests end. Out next challenge as a globe will be to focus and support efforts at community livability around the world, so that no society remains in danger of not recovering. Although the discussions around these efforts have centered around technology, information, social media and open systems that promote transparency and access, we need to look at all of those factors through the filter of culture and identity. And we need to make sure our models incorporate heritage, history, memory on the one side, and contemporary forms of cultural expression on another. 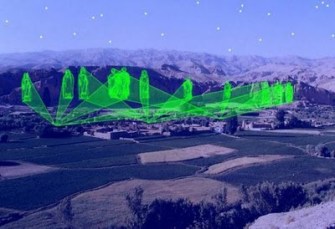 Laser recreations of The Buddhas of Bamiyan, Hiro Yamagata

Lina Srivastava is the Principal of Lina Srivastava Consulting LLC, which focuses on employing strategy, planning, engagement, and transmedia design to create and demonstrate social impact. She is also a Fellow at the Hybrid Reality Institute, which explores the social implications of human-technology co-evolution.

A judge in Florida ruled this week that the entire Affordable Care Act is unconstitutional. According to political scientist and Supreme court-watcher Scott Lemieux, that’s probably not the end of […]