NASA is in a catch 22 situation.  Five years ago, Congress mandated by law that NASA should track 90% of all of the dangerous asteroids and comets that may threaten the Earth by 2020. Just last month, though, the National Academy of Sciences announced that NASA may be out of money to meet this mandate. I think it would be short sighted and unwise not to fund NASA’s continued monitoring of extraterrestrial objects that could potentially destroy all life on Earth.

I go back to the perception that Hollywood has gave us all these years in the movies. Anyone who has watched films like Armageddon gets the impression that there are all kinds of tracking stations and professional astronomers combing the skies looking for these dangerous objects. Well, not so fast; in reality, most researchers are in fact amateurs who do the thankless job of hauling out their telescopes on a cold night and taking pictures of the sky and comparing it to the previous days photographs.

On July 19th, an impact mark on Jupiter was spotted by an amateur astronomer in Australia which “drew the attention of scientists at NASA’s Jet Propulsion Laboratory to the change in Jupiter’s south polar region.”  NASA posted both images and explanations on their website, and stated: “Following up on a tip by an amateur astronomer, Anthony Wesley of Australia, that a new dark ‘scar’ had suddenly appeared on Jupiter, this morning between 3 and 9 a.m. PDT (6 a.m. and noon EDT) scientists at NASA’s Jet Propulsion Laboratory in Pasadena, Calif., using NASA’s Infrared Telescope Facility at the summit of Mauna Kea, Hawaii, gathered evidence indicating an impact.“ 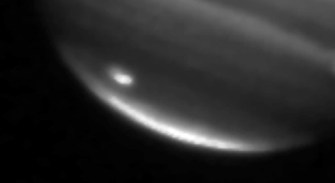 This just goes to show that incidents like these have in fact caught us off guard where no one necessarily knew that it was going to happen. If you compare this incident to the Shoemaker-Levy comet, for example, there was warning, and it was tracked by both professional astronomers and amateurs alike. This time, the astronomical community was in a sense caught with its pants down because we only saw the end result (the point of impact) and we still don’t know if it was a comet or a meteor. The object that hit Jupiter is probably less than a mile across (if it’s similar to the Shoemaker-Levy comet). However, the fireball the was created by the impact was nearly the size of the Earth—or it least the size of the Pacific Ocean—and so it’s humbling to realize that even small objects can create enormous destruction.

For example, the Meteor Crater in Arizona was formed about 50,000 years ago and is about 4,000 ft in diameter with some areas reaching 570 feet deep and is surrounded by a rim that rises over 100 feet above the surrounding plains. Based on recent research, the impact was substantially slower than originally thought (about 28,000 mph) and itis believed that about half of the impact’s 330,000 short tons bulk was vaporized during descent before it actually hit the ground.

To be continued later this week…

When you compile a list of artists that other artists love to hate, a few names typically appear: Jeff Koons, Thomas Kinkade, and, perhaps most virulently, Damien Hirst. You can […]