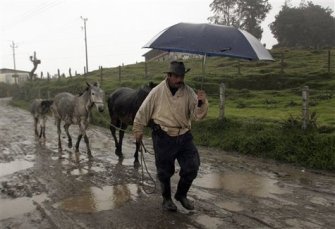 Lost in the Yellowstone arglebargle is the fact that some volcanoes are actually erupting. The NASA Earth Observatory posted a great image of the summit area at Turrialba in Costa Rica. The volcano has been showing signs of life after over 100 years of quiet. The activity has apparently prompted the evacuation of farmers near the volcano due to the amount of fumarolic degassing – mostly of carbon dioxide, water vapor and sulfur dioxide.

More on the January 2010 Yellowstone Swarm

More details on the current earthquake swarm at Yellowstone along with a reader-made video showing the seismicity of the swarm.