Back to work after Thanksgiving Break … lets clean up a few news items I missed trying to figure out the non-eruption of Karkar. 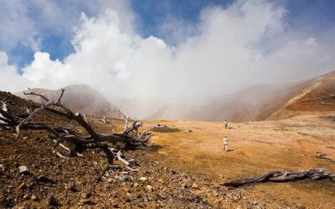 Undated photo of the summit area of Gaua, Vanuatu.

Part 1 of the Q&A from Dr. Boris Behncke of the Italian National Institute of Geophysics and Volcanology in Catania.