Quick hits for a Monday morning (however, the week did have a good start). 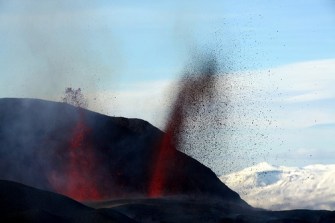 nLava fountaining on March 27, 2010 at the Eyjafjallajokull-Fimmvörduháls eruption in Iceland.

Did the Mars Reconnaissance Orbiter snap a picture of a Martian eruption?