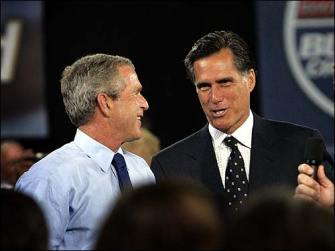 The Associated Press reports that outgoing MA Gov. Mitt Romney has appointed Aaron D’Elia, a state budget director with no formal scientific background, to be executive director of the Massachusetts Life Sciences Center, an agency created by the legislature to distribute state funding for stem cell research.

TMP Cafe notes that in selecting D’Elia, Romney is signalling that he prefers idelogical compatriotism over expertise, pandering to social conservatives in the lead up to his planned 2008 presidential run.

University of Massachusetts President Jack Wilson voted against the appointment, saying it was made without a search. The UMass president said during an interview with The Associated Press, “I also feel that when we select leadership for an organization like this that we should use professional procedures, that we should have searches and that we should hire the best available person.” Asked whether Romney was seeking an ideological compatriot in D’Elia, Wilson said: “All I can say is that I think that Gov.-elect Patrick really wants to make sure that there is openness for research in stem cells.”

Democratic Gov. elect Deval Patrick, during a news conference at UMass-Amherst, noted that Romney had rescinded lame-duck appointments made by his predecessor, acting Gov. Jane Swift, a fellow Republican. “I can’t ask the governor to shut down the government between the time of election and the time of my inauguration, but the fact of the matter is in the case of some appointments, he is making decisions that are of a long-term nature when he is, in effect, a lame duck governor,” Patrick said. “And it’s the very behavior he criticized, in his predecessor, as he was taking office, so it’s frustrating to me.” Patrick also indicated he was concerned D’Elia would share Romney’s opposition to research beyond that on existing stem cell lines. Patrick sees embryonic stem cell research and biotechnology as key to the state’s economic future.