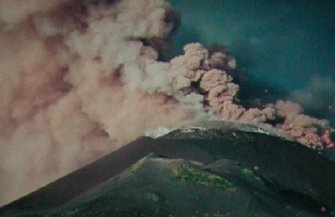 There are a few brief reports of a minor eruption at Soputan in Indonesia. The reports from the Associated Press mention a small eruption column that reached ~1,000 meters and was accompanied by ash fall and explosions. From the sound of it, the eruption(s) are minor Strombolian types, common at arc stratovolcanoes like Soputan. Indonesia officials have warned people to watch for potential lava extrusion that might follow these explosive, possible “throat-clearing” blasts. Soputan was reported to have erupted earlier this year and has erupted frequently over the last decade.