I’m off to GSA 2010 in Denver in a little bit, but I’ll bring you a brief update of the eruption overnight at Merapi. As you might have read in the updates/comments from yesterday, Merapi experienced a large explosion during the night on Friday. This new eruptions appears to be bigger than the explosion on Tuesday that killed 38 people (so far) and it caused the people living near the volcano who have not evacuated to panic and flee – in fact, the Indonesian government called in 2,000 military troops to clear the area around Merapi. James Reynolds is on the ground near Merapi documenting the eruption and he told me:

It’s been an intense 36 hours to say the least. The eruption last night was just mind blowing – like watching a space shuttle taking off in the back garden with the roar noise, lightning and shear scale of the column … I’m in an ash coated Yogjakarta now and will probably spend my last day at Merapi tomorrow before heading home on Monday.

I think that would frighten anyone who isn’t a seasoned eruption chaser like James (you can follow all this updates on his twitter feed). The plume from the latest looks like it was quite impressive (see top left image courtesy of James – click to see a larger version) and be sure to check out the video of last night’s eruption.

Ash from this latest eruption, as James mentioned, has made it all the way to Yogjakarta (40 km away), reducing visible in the city to only about 50 meters. Ash was also reported as far as 65 km away in Klanten (Central Java). Supplies of masks to protect from breathing in the air are in short supply as well. However, there is no intention right now to evacuate anyone in Yogjakarta, whose population is over 400,000. 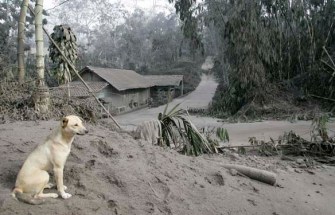 Thick ashfall in the areas near Merapi, Indonesia.

Now, this behavior at Merapi is actually not out-of-character for the volcano. As lava domes form, they can be destroyed by gravitational collapse or by an explosion underneath the dome caused by new magma intruded. Both events can produce large ash plumes and pyroclastic flows. This activity can be punctuated by lava flows at the summit as vent is clearedby each dome-destroying event. You can see images of past domes on Merapi in this image gallery {h/t to Boris Behncke}.

Continue to post updates here. I’ll add if I run into more info before I’m sitting on my flight to Denver.

UPDATE: Here are some maps of the sulfur dioxide plumes from the Merapi eruption over Indonesia – today (10/30) and yesterday (10/29). If you compare the two, you can clearly see the large plume coming from the volcano on 10/30. {h/t to Eruptions reader Monika}

Top left: The eruption plume from Merapi in Indonesia on the night of October 29, 2010. Image courtesy of James Reynolds. Click here to see the original.

“The elimination of poverty ought to be within our grasp, and yet for hundreds of millions of people over the globe, it remains but a dream. Why can’t the world’s wealth be shared?”