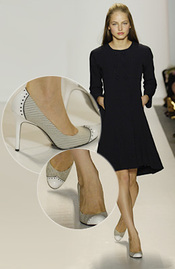 One of the most interesting examples in Malcolm Gladwell‘s landmark book The Tipping Point was the case of shoe retailer Hush Puppies, which experienced a hipster revival in the mid-1990s, thanks to the efforts of the “cool kids” in Manhattan. From a relatively small neighborhood in the East Village, these influentials unknowingly launched a fashion trend that went nationwide. When fashion designers were scoping out the scene Downtown, they kept noticing that the hipsters were wearing Hush Puppies and started to feature these shoes in their runway fashion shows. From there, the trend took off like wildfire. As Gladwell describes it, the Hush Puppies phenomenon (from dowdy old fashion brand to hipster sensation) is an example of a product that “tipped.”

So… I almost spilled my Saturday morning coffee when I noticed the page 1 story in today’s Wall Street Journal (sub req) – “After a Slump, Payless Tries On Fashion for Size: Low-End Shoe Chain Joins Trendiness Trend; a $40 Calfskin Bootie.” My guess is that the seed for the story idea was planted by some enterprising PR representative (it is Fashion Week in New York, after all), but what’s fascinating is the way the article was pitched to the Wall Street Journal. It wasn’t a “Tipping Point”-type story — it was a “Payless-meets-Target-design”-type story. Notice, for example, that this is not a case of hipsters “discovering” Payless; rather, it’s a case of Payless intentionally attempting to discover the hipsters:

“[Payless CEO] Matthew E. Rubel believes stylish products and spruced-up stores will lure young, hip consumers and persuade longtime customers to spend more… This summer, the company will open a design office in New York to focus on original styles, and for the first time it has its own design chief. It’s advertising in Vogue magazine, getting exposure for its shoes on the runways of New York’s Fashion Week, and spending more than $100 million a year on marketing. Even its logo has been redesigned, although it still uses the trademark Payless orange. Trying to be trendy is itself a powerful trend among mass-market retailers who long for the booming sales and profits of Target and Sweden’s H&M. Both of these retailers have trained shoppers to expect style pizzazz alongside budget prices.”

So, what do you think: Is Payless ready to tip?