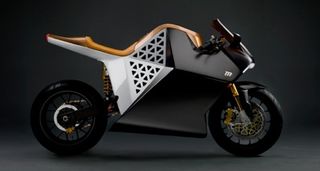 At first glance, this futuristic Mission One Superbike looks like a cross between Batman’s tricked-out motorcycle from The Dark Knight and something from an Extreme X Games competition. In reality, it’s an environmentally-friendly, electric battery-powered superbike capable of reaching 161 mph on the straightaway. (Check out the videos of the superbike on the Bonneville Salt Flats)

At one point in time, “eco-friendly” meant you had to compromise on performance and power. Not any more. The goal of the Mission One Superbike is to combine superior performance and world-class iconic design while achieving the goal of creating a better planet:

“When GM built the EV1, electric vehicles were slow, heavy, and expensive compared to the gasoline

competition. We can now change that paradigm. By integrating the latest in battery technology with

more powerful motors and smarter technology, we can build an electric drivetrain that outperforms

the combustion engine. Electric drive will define a new era of performance, one in which we look

at more than just horsepower and top speed ratings. Our mission is to build an electric motorcycle

and impact on the environment. By starting with that vision for a vehicle, we want people to realize

that the day has come where clean, electric, and sustainable no longer mean a compromise.”