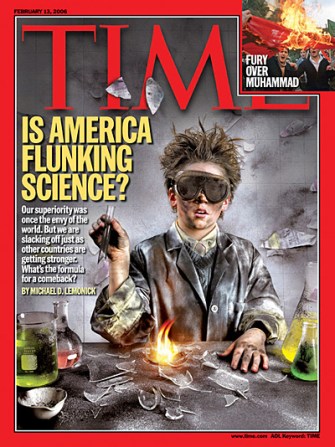 The “Economic Competitiveness” frame is one of the dominate ways that proponents of science try to rally public support for investment. Historically, first in the context of the Cold War, and now in the context of globalization, American science has warned that the U.S. is falling behind other nations in science education, PhDs, engineers, science spending etc. The strategy is a classic example of the construction of a social problem, interpreting real-world statistics or events in ways that raises alarm, mobilizes concern, and sponsors action. (See this recent Time magazine cover story as an example or last week’s answers to Ask a Science blogger.)

Now, NPR runs a story this morning on Duke University engineering students who decided to double-check government statistics on just how bad the problem might be. Does China, for example, really produce eight times as many engineers as the U.S.? And even if they did, given the population size of China and the level of training available there, in comparative perspective, is this something to be worried about? The link to the Real Audio is not live yet, but it is definitely worth checking out later today.

Of Motorcycles, Mozart and the Nature of Tolerance

The motorcycle gang pulled in to the parking lot in a small town in upstate New York. They put down their glistening kickstands and sauntered into the grocery store, one […]