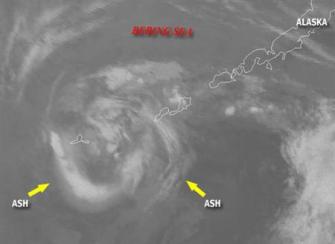 The current eruption at Kasatochi is causing a lot of flight cancellations for flights from Alaska to points in the continental US. The ash is swirling its way around the Aleutians along flight lanes (see above), with the ash drifting southeast over the Alaska Panhandle and could hamper air travel in Alaska and Canada for days according to the USGS (although Alaska Air says it might start flying again later today). As for the eruption itself, not much new news beyond the initial impression that the volcano went from quiet to explosively erupting to produce at 35,000 foot (~10,000 meter) ash column in a short period of time. The little bit of information I can glean from these articles mentions that activity at Kasatochi appeared to increase over the weekend (and that seismic activity increased and decreased over the weekend at one of the other erupting Aleutian volcanoes, Okmok).