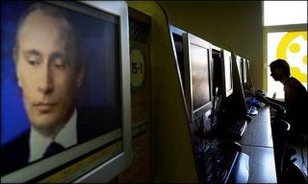 At the upcoming Cebit technology event in Germany, Russia is officially advertising itself as the “Innovation Nation.” It’s basically an attempt by Russian government officials to highlight the nation’s wealth of programmers, technologists and scientists and entice foreigners to invest directly in the nation’s technology sector. The goal, of course, is to diversify the Russian economy away from missiles and oil rigs:

“At Cebit from March 15-21 in Hanover, Germany – the world’s largest

Russia, this year’s “partner” country, is presenting itself as “the

innovative nation.” Its accomplishments are clouded, however,

pushed for diversification of Russia’s economy, whose growth in recent

gas and other raw materials. “Information and

government is backing the creation of special economic zones for them.”

Hopefully, this new “innovation nation” advertising slogan is based on more than innovative ways of poisoning ex-KGB officials, innovative ways of expropriating private sector assets, and innovative ways of playing hardball in political elections. Russia is one of those “emerging” markets that never quite seems to “emerge.” While the law-and-order regime of Vladimir Putin has certainly brought a bit of stability to the nation, it’s hard to believe any deep-pocketed foreigners will really want to invest their money in a country after they saw what happened to Khodorkovsky and Yukos. (Trust me, Khodorkovsky isn’t serving time at some kind of Camp Cupcake).

[image: Big Putin is Watching You]