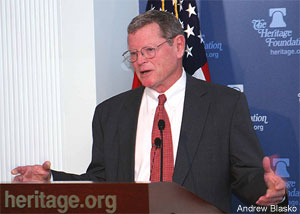 As I’ve argued before, conservatives often have the advantage in elections and policy battles because of their tendency to enforce greater message discipline and coordination. The latest example is James Inhofe who for a decade has been perhaps the most visible and loudest voice of climate denial.

But now as his party’s presidential nominee John McCain uses action on climate change as a way to appeal to moderates, Inhofe may very well be “laying low,” letting his party leader do the talking on the issue, and refraining from what would otherwise be confusing messages about where the Republican party stands on the issue.

Mr. SAMUELSOHN: It was funny. Inhofe really took a backseat on this debate and past climate-change debates. He’s been front and center on the floor, talking about the science, questioning the science, and his aides, you know, predicted a couple weeks beforehand that he wasn’t going to be doing that anymore, and they kind of – they used a couple of other Republicans, as sort of the people in the front who were leading the opposition on gas prices primarily.

Inhofe was at a couple of the press conferences, and you know certainly, he is well. Actually, he really didn’t go after the science so much. I mean partly, that could be, you know, their presidential candidate John McCain is in a completely different position than Jim Inhofe on the science and climate change. So…

FLATOW: Hey, he did give some figure about thousands of scientists who were in a – you know, didn’t believe in it, at one point of the debate, if I remember correctly, but stretching back…

FLATOW: But he’s still trying to make the public believe that, But that is a sea change, is it not? That he had probably the lone voice there.

Mr. SAMUELSOHN: Absolutely, he had some proponents of, you know, actions pointing that out quite clearly that, you know, we’re no longer debating if we need to do anything. It’s now we’re debating how, and you know we didn’t really get into a complete debate about how, but that debate did start.

The National Journal has released its annual survey of Congressional members on their views of climate science. When asked: “Do you think it’s been proven beyond a reasonable doubt that […]