Spacehacking is a common craft among urban dwellers who want to make the most out of their less-than-generous floor plans. From Japanese-born, German-based designer Yuya Ushida comes Sofa_XXXX – an ingenious chair that expands into a 3-person couch. Meticulously engineered and made of 8,000 custom-made wooden chopsticks of four different lengths, the couch took three months to build. 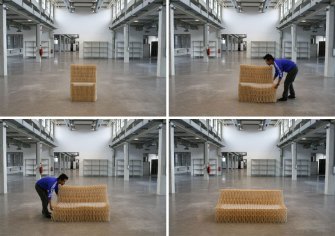 Made of biodegradable materials and remarkably space-efficient, the sofa is a pinnacle of design ingenuity and a clever solution for the spatially challenged urbanite.

All About the World’s Most Prestigious Academic Journal

Academic journals, like universities, gain prestige by refusal. The smaller the number of applicants you admit onto your pages, the greater your glory. With logic worthy of Charles Dodgson, then, […]