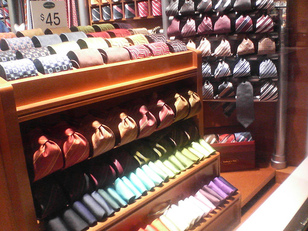 In addition to being the authoritative resource on everything related to technology and information, Google is now the worldwide fashion authority.  Controversial thought leader Nicholas Carr, former executive editor of the Harvard Business Review, points to a letter to the editor in the Financial Times that links wearing ties to a lack of creativity:

“Sir, Your fashion editor analyses whether the tie has a future. Well, it has a rather bloody past, to be sure.

constricts circulation to the brain. And it acts as decorative

camouflage for the business suit, designed to shield the middle-aged

male physique, with its shrinking shoulders and protruding paunch, from

lose their “business attire” and wear T-shirts to work. Wouldn’t you

like to know whether your business partners are fit? Why should you

trust a man in business if he abuses his own body? And heaven knows

what waves of creativity might be unleashed, when men are freed from

If your fashion editor can hardly imagine a

better garment for men to exhibit their personality, power and

masculinity than wearing ties, well . . . I work at Google. Our

unofficial motto is, “Be serious without a suit.”

The letter is signed by none other than the “Global Privacy Counsel” of Google. Anyway, keep an eye out for Nicholas Carr’s new book, The Big Switch: Our New Digital Destiny, due out in January 2008.

A big hat tip to Innovation Zen for bringing this book to my attention: 101 Innovation Breakthroughs. Innovation Management Inc., a unit of Monitor Group, has compiled a book of […]