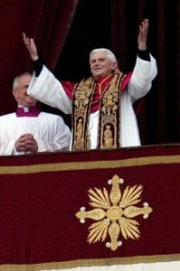 From the UK’s Independent:

The Pope is expected to use his first address to the United Nations to deliver a powerful warning over climate change in a move to adopt protection of the environment as a “moral” cause for the Catholic Church and its billion-strong following. The New York speech is likely to contain an appeal for sustainable development, and it will follow an unprecedented Encyclical (a message to the wider church) on the subject, senior diplomatic sources have told The Independent. It will act as the centrepiece of a US visit scheduled for next April – the first by Benedict XVI, and the first Papal visit since 1999 – and round off an environmental blitz at the Vatican, in which the Pope has personally led moves to emphasise green issues based on the belief that climate change is affecting the poorest people on the planet, and the principle that believers have a duty to “protect creation”.

The Independent article attributes the Pope’s recent focus on the environment as in part due to the behind-the-scenes work of UK diplomats.