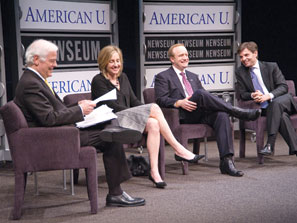 On Monday night, AU’s School of Communication sponsored a screening at the Newseum of the 1992 campaign documentary The War Room with a panel discussion that included stars George Stephanopoulos, Dee Dee Myers and Paul Begala. The event was part of the Reel Journalism film series co-sponsored by the School of Communication and the Newseum. The series is hosted by Nick Clooney, veteran broadcast journalist and father of actor George Clooney. The Politico covered the event and runs this photo of the discussion.

One question from the audience struck me as particularly important and it was prompted by a line of conversation that had developed early on during the evening event. The panelists after viewing the film had remarked that it looked very old and very dated, everything from the clothes and the hair to the technology. Stephanopoulos even joked that he was a bit embarrassed by the film since he thought their “war room” in comparison to the 2008 Obama campaign was relatively amateurish and unsophisticated. Everything they were trying to do, remarked Stephanopoulos, was completely new and the Obama campaign took any innovations they had introduced in 1992 to a dramatically different and altered level.

So given this discussion, the audience member asked whether in 2012–twenty years after the film had been made–if there was anything of relevance to be learned if students or young campaign staffers were to watch the film?

If I remember correctly, it was Dee Dee Myers who stepped in with remarks that reflected how I would have answered the question. She correctly observed that if there was an enduring lesson to The War Room, it was the importance of understanding how voters think, creating a message in line with that thinking, and then successfully and consistently delivering that message.

When I teach my course on Political Communication and my seminars on communication theory, I often show clips from The War Room as well as the more recent 2004 campaign film So Goes the Nation. Indeed, when I show these clips, I use them as a way to bring home and directly visualize for students the importance of framing, messaging, and what political scientist Samuel Popkin refers to as the “low information rationality” of audiences.

In fact, James Carville, Clinton’s 1992 campaign director and the co-star with Stephanopoulos of the War Room, has credited Popkin’s book The Reasoning Voter for helping to inform his message strategy on behalf of Clinton. Famously, Carville’s war room headquarters featured on a white board the three themes that every message in the campaign was intended to be crafted around, themes and talking points that resonated with the concerns of key swing voters in 1992:

Change versus more of the same

And don’t forget about health care.

As Stephanopoulos remarked early on in Monday’s panel at the Newseum, these themes were the guide posts for the campaign. If something was not translatable or relevant to these three over-arching frames to the campaign, then it probably wasn’t worth talking about or spending communication resources on.

You can watch video of Stephanopoulos’ remarks on this angle at the Newseum web site as well as full video or other excerpts of the panel discussion.