It’s long been speculated that the largest moon of Saturn, Titan, has large volcanoes made of ice. In 2005, it was thought that one of these ice volcanoes had been discovered, but further studies showed that it wasn’t one after all. These large ice volcanoes are referred to as cryovolcanoes but direct observations of them on Titan have always been quite difficult due to its hazy atmosphere, which makes images fuzzy or blurry. The existence of ice volcanoes is not a new idea as scientists have already confirmed that they exist on another of Saturn’s moons, Enceladus. Instead of red hot molten lava volcanoes, like we have here on Earth, these cryovolcanoes spew jets of icy material into the atmosphere wherever they are located. 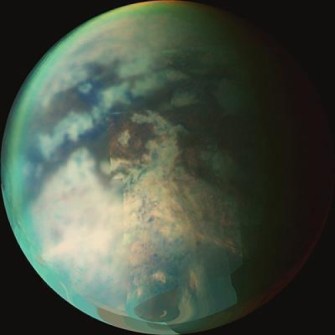 Composite view of Titan built thanks to Cassini’s images taken on 9 October and 25 October 2006. (Credit: NASA/JPL/University of Arizona)

Recently, the Cassini probe has detected an over-4,000′-high mountain with what appears to be several large holes or pits—one of which is, astoundingly, almost a mile deep. The images that Cassini has provided us with also show a downward flow of material on the outer edges and faces of this mountain. Cassini has a variety of scientific instruments on board, including radar and infrared. When these tools are combined, scientists here on Earth can then develop three-dimensional topographic maps and surface composition analysis of Titan. It was first thought that some of these pits could in fact be impact craters from a distant past, but experts now think that is probably unlikely. 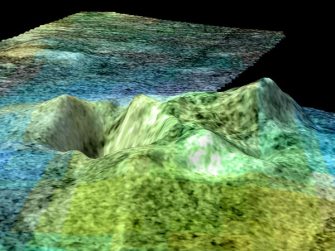 The image above (provided by NASA) shows a radar mapping image made by the Cassini spacecraft of a flyover area on Saturn’s giant moon Titan showing an ice volcano. There’s been ongoing debate about whether volcanoes exist on ice-rich moons in the outer solar system.

The Titan moon has long had a number of mysteries that we have not been able to explain. For example, we know that the moon has a very thick atmosphere that is rich in nitrogen but also carries a substantial amount of methane. The methane is what gives the giant moon its orange hue. It’s known that methane can be produced by a number of different factors such as deterioration of organic debris or volcanoes, and scientists have been puzzled because it is thought that methane would essentially break down due to sunlight and radiation from space.  This means that there is something else fueling the supply. Scientists now think that this cryrovolcanos on the surface may be the culprit of the smoggyness in the atmosphere. A cyrovolcano may be spewing large amounts of methane into Titan’s atmosphere, but the Cassini team isn’t completely sure, they believe it might be mostly water and ammonium or lots of hydrocarbons. Randy Kirk, a team member and geophysicist of the U.S. Geological Survey,  states that “this offers us one way to get at that interior.”

There are, of course, still lots of unanswered questions surrounding the new Cassini images and Titan itself. Scientists have not determined if this is an actual volcano and they have yet to determine the true source of the replenished methane on Titan but let’s hope that new studies will confirm this. If this is confirmed, it will finally put to rest some of the debates that have been going on for decades. Where does the energy of these volcanoes come from? The energy of volcanoes on the earth comes largely from the fact that the earth’s core is radioactive. Long-lived radioactive elements continually heat up the earth’s core for billions of years. But on Titan and other moons, most likely the energy source comes from gravitational tidal forces coming from the mother planet. For example, Io is a moon of Jupiter which has perhaps the largest number of active volcanoes. The energy of Io’s volcanoes probably comes from the fact that it is being continually squeezed by Jupiter’s great gravitational force, creating friction, which then causes the core to heat up. Something similar may happen for Titan.

Clip is based on data from NASA’s Cassini spacecraft and shows a flyover of an area of Saturn’s moon Titan known as Sotra Facula. Scientists believe Sotra is the best case for an ice volcano — or cryovolcano — region on Titan. Credit: NASA/JPL-Caltech/USGS/University of Arizona

What Should We Think About Those MAD MEN?

It’s the season for highlighting the best that was written, said, and done in 2010.  The consensus is emerging that the most thoughtful TV show (and so the one that […]