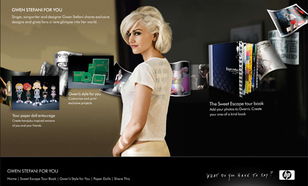 nWhen I first heard that Hewlett-Packard was launching a $300 million campaign called Print 2.0, my first reaction was a bit of skepticism. However, it looks like HP has really embraced the Web 2.0 movement, partnering with Web 2.0 icons like Flickr and Six Apart (makers of the Movable Type blog publishing platform) to re-define the future of printing. (For example, HP has partnered with Movable Type to create a special “print plug-in” for blogs, so that Internet users have an easier time printing out and sharing blog entries.) While other companies like Kodak and Sony sat by and watched their market share become eroded by faster, nimbler digital competitors, it looks like HP has taken up the challenge earlier rather than later. HP makes a nice slug of cash from selling print cartridges (even more than it does from selling printers!), so I’m sure it wasn’t an easy decision to acknowledge that the traditional print business model needed an overhaul.

At the end of August, Eric Kintz (VP of Marketing, Digital Photography and Entertainment for Hewlett-Packard) described the Print 2.0 revolution on his Digital Mindset blog:

“I am in NYC today blogging live for the launch of our new marketingncampaign, a whole array of great new products and the announcement ofngroundbreaking partnerships for the Print 2.0 revolution. The vibe isnjust amazing here with 600 partners, customers, analysts andnjournalists (yes also bloggers, John Battellenis here). The first print revolution was around PCs and applicationsnand HP became the symbol of desktop publishing and office productivity.nWe are enabling a second wave around the web where customers are inncontrol and want to create, mash, manage, share and publish theirndigital content in ways that couldn’t be done before. We are empoweringncustomers to be their own authors, editors and publishers and give themnextraordinary ways to share their stories with the world. We have builtnan entire home here (I have to post pictures of the teen bedroom!) tonsee how we are transforming the lives of families all around the world… We are literally igniting a Print 2.0 revolution!”

[image: a very demure Gwen Stefani for the Print 2.0 revolution]

The monsoon rains were not always so reliable.
Up Next
Guest Thinkers

The most innovative B-schools in America

The Wall Street Journal recently ranked the best business schools in America according to a number of criteria, including a list of the 10 MBA programs that produce the most […]