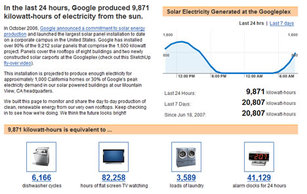 consistently tracks some of the most interesting and cutting-edge thinking related to green innovation. As EcoGeek explains, Google’s new Solar Power initiative is helping to raise awareness of alternative energy sources within Corporate America. It’s now possible to watch the sun power the geniuses at the Googleplex in real-time:

“Google has just switched on its gigantic solar project and, in traditional Google fashion, has an excellent web-based application

tracking its progress. Anyone familiar with Google’s stats package will

recognize the software used here, but it’s really cool to see the

actual amount of power being generated by the panels at any given time. And, of course, we have the obligatory “this would power 41,000

One day soon, of course, we expect the Google Solar Panel Project to power the Googleplex for every hour of every day.