Some would argue that Satan is always with us (you know who I’m talking about) but he sure was a lot more with us in the era that also produced bell bottoms, disco, and the Sweathogs. Come to think of it, he may have had a hand in those as well.

The Seventies was rich in Satanic entertainment: The Exorcist and The Omen filled the theaters and the paperback aisle at Kroger’s always had at least one leering devil among the titles. The Church of Satan’s Anton LaVey even served as a technical advisor on the murky 1975 production of The Devil’s Rain, starring William Shatner and a young Sweathog named John Travolta (see!), and yet nobody organized a protest.

But no one was more Satanic than Marvel Comics’ Ghost Rider.

The demonically powered, leather-clad biker with the iconic flaming skull made his debut in 1972, pulling together a variety of B-movie elements and fusing them into one devilish package.

A quick recap for those who have forgotten or who had boring childhoods:

Young Johnny Blaze is left an orphan when his professional stunt motorcyclist father is killed in, naturally, a motorcycle stunt gone wrong. He is adopted and raised by a family friend and his wife, Crash and Not-Important-Enough-to-Have-a-First-Name-Simpson. They are also stunt riders. Johnny eventually falls in love with Crash’s daughter, Roxanne.

When Crash finds out he has a fatal disease everything looks bleak until Johnny breaks out the books of demonology, conjures Satan, and makes the deal with the Devil to save his adopted father from what we assume is cancer of the Plot.

But Satan is a tricky one and Crash dies anyway when he misses a jump at Madison Square Garden. Now Johnny owes his soul to Satan and the Devil wants his due.

When Satan does arrive for Johnny’s mortal soul the rather painful extraction process is interrupted by Roxanne, who banishes the Devil with a few choice words about her purity. And by “purity” we mean “virginity” though GR takes a few more issues to spell it out. And how did she know what to say? “Though you never realized it…I read your books on Satan…when you weren’t around.” Just boning up, I guess.

Roxanne saves Johnny from immediate damnation but Blaze is forever destined to carry the mark of Satan’s servant – a flaming skull and the demonic power of hellfire.

The interesting thing about this transformation is there are no other indicators that young Johnny Blaze would turn to Satan to solve his problems. He comes from a nice family, has a good job and a beautiful girl is in love with him. But when trouble arises, BAM, straight to Satan.

Old Nick is literally the first resort. He doesn’t pray to God, he doesn’t ask Jesus for help, he goes right to Plan S. Conveniently, Satan is only a few incantations away. I’ve had more trouble getting my tags renewed.

And while today’s comic shops may have fewer children than an Engelbert Humperdinck concert, back then comics were primarily marketed to kids. Comic shops didn’t exist. Picture Shia LaBeouf turning to Satan to save his girlfriend from the Decepticons. Sure, it’s a better story than any of the Transformers movies but it’s pretty unlikely in today’s environment.

And Ghost Rider’s brimstone ride continued – as the comic progressed GR continued to fight Satan as well as other demonic entities and devil worshipers, including possessed bikers, Apache sorcerers, Nazi bikers, the Son of Satan, regular bikers, and a shark (after Jaws but before Fonzie jumped one). 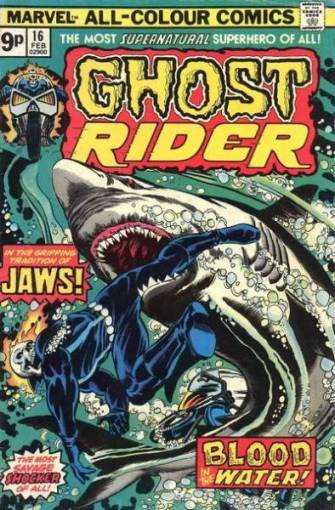 By the eighties, the satanic swath in American culture had ebbed and Ghost Rider ebbed along with it. His comic ended in 1983. He still shows up from time to time and remains a fan favorite but it’s telling that the Marvel Comics online store doesn’t carry a single Ghost Rider product as of this writing.

The era of Satanic entertainment was largely over but Satan was far from out of the picture. A growing movement of organized and well-funded Christian religious activists had risen to national prominence. At roughly the same time, many Americans had come to believe that Satanists had infiltrated every level of society and were coming for the children. The mid-Eighties saw the Satanic Panic in full bloom. People were on the watch for Satanists creeping into their school boards and local governments to secretly gain power. While they were watching, right-wing Christians started running for school boards and local governments to secretly gain power. Funny that.

Ghost Rider is still out there though, riding through the desolate mountains of the southwest and dispensing justice to the wicked. The original issues are still worth a look and contain powerful art and fast-paced storytelling. I read them to my six year old nephew when I’m babysitting. “Ghost Rider is cool,” he says. 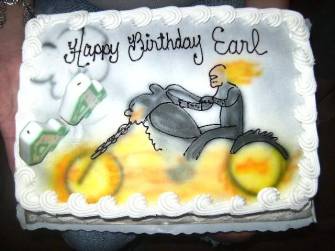 Save a piece for Satan!

AUTHOR’S NOTE:  Some people claim there was a Ghost Rider film a few years back starring Nicholas Cage. I’m not sure how this rumor got started but that’s a terrible idea and obviously no such film exists. 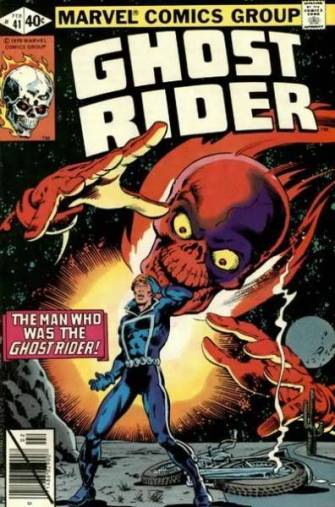 ‘Naming the problem so we can fix it’ or ‘shaming and blaming?’