Not much in volcano news, however a lot of earthquake news this morning.

Did anyone else notice that two M6+ earthquakes occurred last night within one minute of each other last night (eastern daylight time)? The first was in the Banda Sea near Indonesia at 01:51:19 UTC (M6.8), the next was in northern Qinhai in China at 01:52:06 UTC (M6.2). I’m guessing that is just the sort of coincidences that occur when you have thousands of earthquakes globally a week, but still an interesting coincidence. There was also a series of earthquakes, all less than M3.7, last night in Oklahoma of all places. Not exactly in a hotbed of seismic activity. 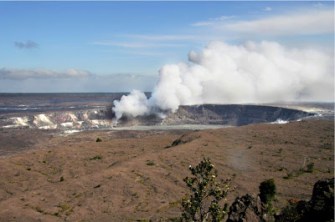 Back in volcano-related news, Hawai’i 24/7 has a post about how the USGS/HVO goes about sampling the ash emitted from the Halema`uma`u Crater. The short answer: buckets. The fun facts in the article include estimates of the amount of ash and lapilli emitted since the Halema`uma`u eruption started last year:

Not bad. It shows that at Kilauea, most of the ash/lapilli ejected comes from the big events (over 80%) — so any time you see ash/lapilli layers in the rock record for a basaltic volcano, you might really be seeing very discrete events rather than a long period of activity. That is why observing the modern can unlock the past.