Another fun weekend for me analyzing zircon on the SHRIMP-RG at Stanford University! I really know how to live it up during the summer. 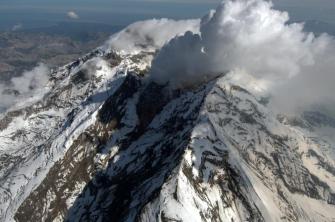 The 2009 dome at Redoubt in Alaska steaming on July 2, 2009. Image taken by Cyrus Read, courtesy of USGS/AVO