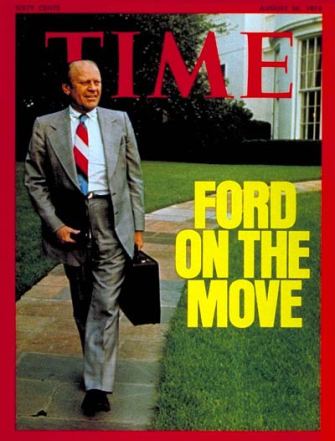 The game is afoot to define the presidency of Gerald Ford. The dominant narrative from the mainstream media is that Ford was the “Great Healer,” an extinct species of bi-partisan statesman who guided the country through the aftermath of the Watergate scandal and the pullout from Vietnam.

The lead to this front page story by Peter Baker of the Washington Post represents the dominant media narrative of “bi-partisan healer”:

A nation deeply polarized by war and partisanship came together yesterday to mourn Gerald Rudolph Ford as a healer during a previous era of division, while Washington began preparing an elaborate farewell for the most modest of presidents….Ford’s legacy as a bridge builder before, during and after his short presidency dominated the discussion in Washington and across the country yesterday, standing in contrast to a time when leaders in both parties often seem unable to join hands on the big issues of the day. During his final years, mostly privately but sometimes publicly, Ford often expressed regret at what he saw as a coarsening political environment that personalizes policy differences and undermines national unity.

Yet other stories remind us of the narrative that ultimately cost Ford the presidency in 1976: an out-of-touch stumbler and bumbler. This interpretation was reflected in Chevy Chase skits on Saturday Night Live, and then reinforced by selective media reporting of any spills that Ford might have taken in his many athletic outings or public appearances. Indeed, late night comedy’s ability to define Ford might be the first example of the rise of infotainment as an important strategic communication arena. 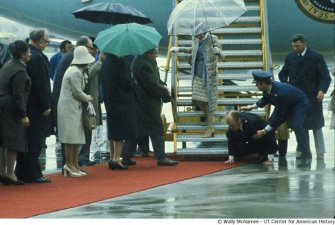 Ford’s SNL plague is also an example of what ultimately tortured future candidates like Al Gore. Media narratives lock in perceived personality flaws like Ford’s “clumsiness,” or Gore’s “truth exaggeration,” and every event or issue becomes re-interpreted through the specific narrative lens, regardless of truth or evidence. Despite being the most athletic president in history, Chevy Chase’s SNL skits in combination with selective media reporting reinforced an impression that Ford was somehow physically challenged.


As another example, consider Ford’s statement at the second 1976 Presidential debate that was later miscontrued by the Carter campaign and the news media as evidence of a bumbling president in a state of denial.

Contrary to the media interpretation that somehow Ford was disputing the notion that the Soviets controlled eastern Europe militarily, it is clear from the transcript that what Ford meant was that the “spirit of freedom” still existed among the citizens of the Eastern bloc countries, despite their Soviet occupation:

FORD:…there is no Soviet domination of Eastern Europe and there never will be under a Ford administration.

MAX FRANKEL: I’m sorry, I – could I just follow – did I understand you to say, sir, that the Russians are not using Eastern Europe as their own sphere of influence in occupying mo- most of the countries there and in – and making sure with their troops that it’s a – that it’s a Communist zone, whereas on our side of the line the Italians and the French are still flirting with the possibility of Communism? 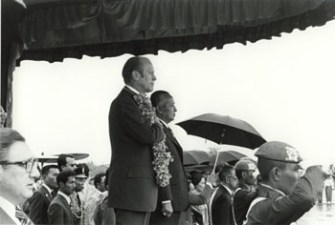 Finally, a few media outlets on the left have focused heavily on Ford’s role as enabler of Henry Kissinger, and specifically his tacit support for the General Suharto-led Indonesian invasion of East Timor. Consider this report and interview at the radio program Democracy Now.

Well documented in books, articles, and documentaries such as The Trials of Henry Kissinger, a search of major US newspapers archived in Lexis Nexis finds that not a single news article appearing this week has mentioned the event.

Somewhere Edward Herman and Noam Chomsky are probably smiling. The lack of coverage detailing Ford’s mirky foreign policy decisions is consistent with the predictions of their Propaganda Model.