We have argued for decades that we are running out of space for our garbage in the thousands of landfills currently peppering the globe… Now we are faced with another problem with our junk and it’s far from the surface of the Earth.

Forget alien invasions! The real problem facing the space program is space junk, which is getting out of hand. Over the past 50 years, the great powers have considered outer space to be the ultimate dumping ground. So far, over 20,000 pieces of space junk, from millimeters in size all the way up to the size of 9 ton booster rockets are currently being tracked by military computers. If one considers pieces of junk down to .5 inches, which are quite difficult to track, then one might estimate that there might be as many as half a million or more pieces of junk, ranging from paint flecks to metal shavings, stray gloves and even tools such as screw drivers and wrenches.

The dangers posed by debris caught in orbit around the Earth is not a new problem and NASA scientists have been talking about it for years. Several computer models of the debris field have been created with vast amounts of data with some estimates stating that the debris will remain until 2055, after which it will increase. One NASA scientist estimated that around 40% (as of 2006) are a direct result of breakups from both spacecraft and rocket bodies. The computer generated illustration below (provided by ESA via Space.com) depicts the density of space junk around Earth in low-Earth orbit. 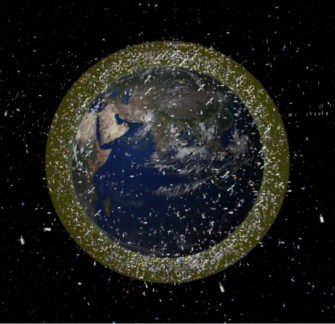 Now imagine driving down the highway and a fleck of paint comes loose from the car in front of you and hits your wind shield at 70 miles per hour; not that big of a deal considering that it would just be deflected or be carried away by the wind. In space however, things are a bit more dangerous. In space, these pieces of junk in space can be traveling at near 18,000 miles per hour and even a very small piece of debris would be more than enough to punch a hole in a satellite or space ship. A perfect example of this would be the pockmarked tiles on Space Shuttle’s that returned from missions that were caused by none other than collisions with tiny pieces of debris. This is one of the core reasons why space junk has become a growing concern and only getting worse.

Back in 2009, an Iridium telecommunications satellite collided with an old Russian satellite above Siberia and created an enormous debris field of space junk. Since the collision, the U.S. Space Surveillance Network has cataloged almost 2,000 pieces of debris from that collision, with about 400 additional pieces or so still awaiting cataloging.

Back in in 2007, the Chinese (following the footsteps of both the US and Russia) deliberately destroyed one its own satellites via a collision with a space weapon (creating an enormous debris field of 2,000 pieces of space junk). The effects of all this space junk is beginning to have other consequences. For example, the International Space Station (ISS) has had to change course on several occasions in order to avoid colliding with pieces of space junk. Also to mention that some of our satellites have also had to move to avoid collisions. Sooner or later there could be a spectacular collision involving our satellites, the International Space Station (ISS), or our booster rockets.

In late June, the International Space Station (ISS) had a close call which forced six astronauts to take shelter in two of the Russian Soyuz lifeboats. According to the June article on the Space.com website (Space Station’s Brush with Space Junk Highlights Growing Threat), this safety measure by astronauts has only happened once before in the life of the Space Station. The Space.com article also stated — The station’s shielding protects it from a near-constant pelting by tiny motes of fast-moving debris. But those defenses would likely have been breached had the object slammed into the orbiting lab yesterday. The piece was large enough to be tracked, meaning it was at least 4 inches (10 centimeters) in diameter, NASA officials said.

Various agencies around the world have recognized the problem and currently trying to determine ways to combat the issue in one way or another. In late June of last year, the Obama Administration addressed the issue of this growing concern with the release of their National Space Policy. A snippet from that June 28th, 2010 document includes: “Decades of space activity have littered Earth’s orbit with debris; and as the world’s space-faring nations continue to increase activities in space, the chance for a collision increases correspondingly. As the leading space-faring nation, the United States is committed to addressing these challenges. But this cannot be the responsibility of the United States alone. All nations have the right to use and explore space, but with this right also comes responsibility. The United States, therefore, calls on all nations to work together to adopt approaches for responsible activity in space to preserve this right for the benefit of future generations.”

What can be done about this? One simple idea is to create a space fence, or super radar system that can detect space debris down to .5 inches. Other ideas have also been ruled out. Using laser beams to blast them might not work, since that would only create more dangerous debris, and most lasers are not powerful enough to destroy these pieces of junk. Another proposal is the creation of a gigantic grappling hook to latch onto the junk. But this has problems because the junk may split apart, creating more debris thus adding to the problem. Also to mention that other nations may consider this a military weapon designed to destroy satellites during a time of war. Another proposal is to spray the debris with space foam which quickly hardens. Because the junk now has more friction with the outer atmosphere, it would then burn up sooner. However, this may still take years to decades for the foam/debris to finally de-orbit. One ingenius proposal being seriously studied is to create a space net which would actually be a long conducting wire that moves within the Earth’s magnetic field. By induction, a current is created as the rod slides through the magnetic field in outer space. This electricity could then be used to navigate the rod, moving it into different orbits. Then the rod would have a series of nets which each net inflating and grabbing onto a piece of debris. The net would then be sent back to Earth, where it will burn up in the atmosphere. These are of course just a few of the ideas and I’m sure that lots more are on the horizon.

There may also be a silver lining to this. Ultimately, it may take team work between the various space-faring nation in order to address this international problem and then coming up with the funds to pay for it. This, in turn, may foster more cooperation between the nations on Earth. This should be done, before space junk chokes off the space program as a whole.

From Dr. Kaku’s Webmaster (@MyGrayMatter): It will be interesting to hear some of your ideas to combat the ever-increasing problem of space junk. Feel free to post your ideas in the comment section below and I will send some of them to Dr. Kaku and post his response in a future blog post!

A recent interview with ABC News sheds a bit of light on both space junk and the re-entry of NASA’s abandoned UARS satellite into earth’s atmosphere that is expected late today or early Saturday. Watch the interview @ http://abcnews.go.com/Technology/space-junk-nasa-predict-entry-certainty/story?id=14587907

531 – A Rio Runs Through It: Naming the American Stream

A body of running water may be called any of many different names, the most generic being stream, the most common being river.  A river can be defined as ‘a […]