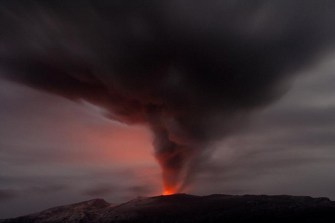 A quick update on the Eyjafjallajökull eruption: Not a lot to report in terms of changes in the volcanic activity at the volcano. The update from the Icelandic Met Office last night sums it up nicely:

Overall activity similar as yesterday. Eruption seen from west in the morning – north crater still active. External water has not affected vent activity much since 18 April. Geologists’ field observations (2-10 km from vents) show that explosivity is magmatic and that the tephra produced since 18 April is much coarser than during first four days. Explosions heard at Fljótshlíð, 10-15 km NW of vents. Meltwater discharge suggest similar lava activity. Processing of data obtained yesterday shows that lava had advanced 400-500 m northwards from crater, forming an ice depression extending some 700 m from vents.nn

Overall assessment: Magma flow rate has remained at similar level over the last few days while plume activity is slowly declining. Lava continues flowing towards north. No signs of melting or meltwater discharge towards south. No signs of termination of eruption.

This update is one of the first to mention lava flowing in the crater, almost half a kilometer at this point. The ash from the volcano is causing little disruption of air traffic today, with even the airports on Iceland reopening after closing over the weekend. Iceland continues to recover from the eruption as well. This is also a report of thermal imaging from space that suggests that the heat being emitted from the volcano is rising, which might make sense if more of the basaltic magma is filling the edifice and erupting in the strombolian explosions and lava flows.

Now, the political storm caused by the flight cancellations continues to rage as well. I still stand by my ascertion that EU officials made the right decision with the information on hand. Most of the articles criticizing the closure refer to information we know now but was unknown to the people making decisions during the eruption – so, remember, hindsight is always 20/20. The question I ask anyone who thinks the closure was wrong: based on the information on hand at the time (ash from a volcanic eruption was likely over Europe, potentially in significant amounts and we have little information of how much ash an airliner can ingest safely), would you have let your mother take a flight? I think, pretty clearly, the answer should be “no”. What this all shows is that EU officials needed a better plan to deal with these exceedingly rare events for most of northern Europe and airlines needed to have ready access to information about how their planes would respond. The way the media and business has responded, by trying to scapegoat the government in being “overly cautious” (as they should be) will make the next ash disruption a lot harder to implement and we can only hope that it doesn’t lead to a real disaster.

Taking stock in the Eyjafjallajökull eruption and its aftermath

The fallout of the Eyjafjallajökull eruption will likely be far reaching, from the politics of the EU, to climate research, to the future of air travel.