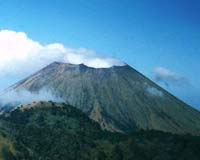 Eruptions and earthquakes go hand-in-hand a lot of the time. It only makes sense as magma needs to move under the crust, causing movement (i.e., earthquakes). Additionally, any sort of explosions caused by the release of volatiles might cause earthquakes or even the collapse of an edifice (which in turn, shakes the earth).

So, it is not surprising that the current eruption at San Cristobal in Nicaragua has produced earthquakes. The reports are relatively lacking in details, but San Cristobal is a typical Central America stratovolcano that produces frequent Strombolian style eruptions, which is likely the case here.