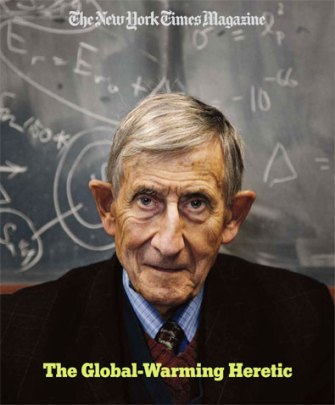 This week’s NY Times magazine runs a cover story by Nicholas Dawidoff on Freeman Dyson and his doubts about the urgency of climate change. Many critics have decried the article as another leading example of false journalistic balance.

Yet I think there are much deeper issues at play here. On one hand, the social scientist in me views Dawidoff’s journalistic narrative as a sociologically nuanced take on what happens when policy debates are simplistically reduced down to a matter of “sound science” and “inconvenient truths” rather than decisions involving values and trade-offs. On the other hand, the strategist in me worries that the sophisticated article and Dyson’s lone wolf views will be used as more fodder by conservatives committed to blocking climate action at any cost.

On the social science side, I write about this in the lead article at the current issue of the journal Environment, combining my analysis with a fair amount of advice on strategy. But for more background, here’s how I describe both the sociological and strategic dimensions in a recently finished book chapter for an edited volume on the ethics of science communication:

“Science,” broadly speaking, can be defined as the systematic pursuit of knowledge, whereas “policy” refers to a specific decision or course of action, and “politics” is the process of bargaining, conflict, negotiation, and compromise that determines who gets what, when, and how (Pielke, 2007). These distinctions matter to public communication and framing. The tendency by scientists, journalists, advocates, and elected officials to define policy debates as exclusively about science and not in terms of either politics or values is often at the root of conflict and puts at risk public trust in scientific research (Bipartisan Policy Center, 2009).

In particular, if science becomes the perceived dominant reason for a course of action, then as a matter of strategy and politics, competing interests will have the incentive to claim that scientific evidence is on their side. As a consequence, an inevitable part of the framing of an issue will involve a contest over uncertainty, with each side potentially hyping or distorting the objective state of expert consensus.

Arguing that a policy debate is simply a matter of “sound science” reduces scientific knowledge to just another resource that interest groups can draw upon in political battles, threatening the perceived integrity of science. Each time an exaggerated scientific claim is proven false or inaccurate; it risks further alienating publics already distrustful of the science and scientists (See Pielke, 2007 for more).

I deeply admire the dedication and tireless work of leading climate advocates such as James Hansen and Al Gore. That’s why it pains me to consistently point out both as a researcher and a strategist that where the two advocates make a major communication mistake is in using science as the central rhetorical means to convey the urgency of climate change rather than effectively emphasizing a values-basis for action. Here’s how I distinguish this difference in the forthcoming chapter on the ethics of science communication:

An overwhelming majority of scientists have concluded that human activities are contributing to climate change and that this presents a major risk to society. Yet this scientific research–this first premise about climate change–does not offer an explicit normative framework that might guide decision-making, helping individuals decide whether action is worth the costs and trade-offs or which policy might be most in line with their values, whether religiously or secularly based. In short, the science does not speak for itself, and as survey research continues to show, this first premise of scientific certainty remains selectively interpreted by the American public based on their values and partisan identity.

Many scientists and environmental advocates, of course, do offer an explicit second premise, though these values are probably not strongly shared by a majority of Americans. As a matter of social progress and environmental ethics, advocates such as Al Gore and best-selling writers such as Bill McKibbon (2008) argue that we should take action on climate change because human activities have shifted the planet into “dangerous disequilibrium,” altering the natural order of things. Not only is it morally wrong to violate and imperil nature but our actions threaten future generations of humans.

Christians must care about climate change because we love God the Creator and Jesus our Lord, through whom and for whom the creation was made. This is God’s world, and any damage that we do to God’s world is an offense against God Himself (Gen. 1; Ps. 24; Col. 1:16).

Christians must care about climate change because we are called to love our neighbors, to do unto others as we would have them do unto us, and to protect and care for the least of these as though each was Jesus Christ himself (Mt. 22:34-40; Mt. 7:12; Mt. 25:31-46).

….In sum, when science policy debates are simplistically reduced down to a “debate over the science” or a matter of “inconvenient truths,” with discussion of values and politics lost in the translation, framing is most likely to be applied unethically, violating the norm of accuracy, and used to hype, exaggerate, or distort scientific evidence. Indeed, if scientists, journalists, and a range of political actors were more open and transparent about the values that guide their preferred policy actions public engagement and dialogue are likely to benefit.

In spring 2007, The Scientist magazine sponsored an online discussion of framing and its implications for science communication. In one posting, environmental-scientist-turned-advocate Mark Powell succinctly summarized this key distinction between communicating the first and second premise:

I left active science to work as an environmental advocate. I learned quickly that values trump hard facts–for instance, people in a logging town had a hard time believing that logging could cause harm, because their value structure was threatened by such a claim. If I started my communications with “logging can harm forest eco-systems,” I mostly got denial and dismissal. Instead, if I started with “do you care about deer and salmon?” then people would say yes and engage in conversation. Later, I could get to my science about logging effects on salmon. Is it lying? No, it’s framing and it’s smart (The Scientist, 2007, p. 42).

The key passage in the NY Times magazine article is pasted below–a passage that bloggers have decried as an unforgivable example of false balance and inexperienced reporting– but what I think can be more accurately described as reflecting the important distinction between communicating the first and second premise in science debates.

The passage opens by describing Hansen’s attempts to dramatize the need for action by using the metaphor of “death trains,” a rhetorical device that instantly activates the looming disaster and catastrophe frame (see The Environment article.)

The passage then describes Dyson observing that what really is at the heart of deciding policy action relative to the complex uncertainties of climate science is values. In fact, in this article we see how Hansen and Dyson as two world-class scientists can perceive the implications of uncertainty and complexity in completely different ways. It’s a classic example of framing at work: when making decisions under uncertainty, perception is referent dependent.

Key frame devices and examples are italicized or in bold.

For Hansen, the dark agent of the looming environmental apocalypse is carbon dioxide contained in coal smoke. Coal, he has written, “is the single greatest threat to civilization and all life on our planet.” Hansen has referred to railroad cars transporting coal as “death trains.” Dyson, on the other hand, told me in conversations and e-mail messages that “Jim Hansen’s crusade against coal overstates the harm carbon dioxide can do.” Dyson well remembers the lethal black London coal fog of his youth when, after a day of visiting the city, he would return to his hometown of Winchester with his white shirt collar turned black. Coal, Dyson says, contains “real pollutants” like soot, sulphur and nitrogen oxides, “really nasty stuff that makes people sick and looks ugly.” These are “rightly considered a moral evil,” he says, but they “can be reduced to low levels by scrubbers at an affordable cost.” He says Hansen “exploits” the toxic elements of burning coal as a way of condemning the carbon dioxide it releases, “which cannot be reduced at an affordable cost, but does not do any substantial harm.”

Science is not a matter of opinion; it is a question of data. Climate change is an issue for which Dyson is asking for more evidence, and leading climate scientists are replying by saying if we wait for sufficient proof to satisfy you, it may be too late. That is the position of a more moderate expert on climate change, William Chameides, dean of the Nicholas School of the Environment and Earth Sciences at Duke University, who says, “I don’t think it’s time to panic,” but contends that, because of global warming, “more sea-level rise is inevitable and will displace millions; melting high-altitude glaciers will threaten the food supplies for perhaps a billion or more; and ocean acidification could undermine the food supply of another billion or so.” Dyson strongly disagrees with each of these points, and there follows, as you move back and forth between the two positions, claims and counterclaims, a dense thicket of mitigating scientific indicators that all have the timbre of truth and the ring of potential plausibility. One of Dyson’s more significant surmises is that a warming climate could be forestalling a new ice age. Is he wrong? No one can say for sure.Beyond the specific points of factual dispute, Dyson has said that it all boils down to “a deeper disagreement about values” between those who think “nature knows best” and that “any gross human disruption of the natural environment is evil,” and “humanists,” like himself, who contend that protecting the existing biosphere is not as important as fighting more repugnant evils like war, poverty and unemployment.

I talked about the pitfalls of the catastrophe narrative in this interview last year at Big Think, discussing alternatives outlined in the Environment article.

When pundits like Richard Dawkins use the trust and authority granted them as scientists to denigrate religious publics, is it unethical?On issues such as climate change, nanotechnology, and evolution, research […]