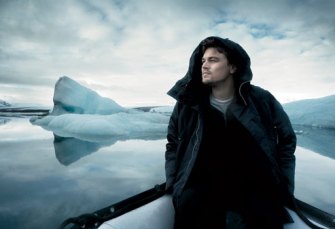 Everywhere you look, polarized views from the tail ends of the bell curve of opinion on climate change are being picked up by the media. Indeed, only at a few outlets like the NY Times, WPost, or NPR can Americans get that “invisible middle” of views on the issue. Unfortunately, these are not the outlets that reach the wider public.

Consider the stories linked to at the Drudge Report today, one of the major agenda-setters, especially for cable news and political talk radio.

From a Vanity Fairarticle excerpting the script of Leonardo DiCaprio’s upcoming documentary The 11th Hour (see note at end of post):

So, we find ourselves on the brink. It’s clear humans have had a devastating impact on our planet’s ecological web of life. Because we’ve waited, because we’ve turned our backs on nature’s warning signs, and because our political and corporate leaders have consistently ignored the overwhelming scientific evidence, the challenges we face are that much more difficult. We are in the environmental age whether we like it or not.

From a columnist at the conservative NY Daily Sun reporting on the Coal Association meetings (no joke):

One of the guest speakers was Bob Murray, founder and CEO of Murray Energy Corporation and probably one of the few CEOs brave enough to challenge the militant climate control movement that threatens the future of America’s economy. In his speech, he dared to say that he regards Al Gore as the shaman of global doom and gloom. He is not joking when he says, “He is more dangerous than his global warming.”

From a column at Real Clear Politics by William F. Buckley:

The heavy condemnatory breathing on the subject of global warming outdoes anything since high moments of the Inquisition….Critics are correct in insisting that human enterprises have an effect on climate. What they cannot at this point do is specify exactly how great the damage is, nor how much relief would be effected by specific acts of natural propitiation.

The whole business is eerily religious in feel. Back in the 15th century, the question was: Do you believe in Christ? It was required in Spain by the Inquisition that the answer should be affirmative, leaving to one side subsidiary specifications. It is required today to believe that carbon-dioxide emissions threaten the basic ecological balance. The assumption then is that inasmuch as a large proportion of the damage is man-made, man-made solutions are necessary. But it is easy to see, right away, that there is a problem in devising appropriate solutions, and in allocating responsibility for them.

(Note: I will be tracking DiCaprio’s movie, and indicators of its impact, pretty closely. As I wrote in a recent report by the Center for Social Media and the Ford Foundation, although any film has to get over the barriers of selectivity bias, I believe more and more that it’s entertainment media and celebrity culture that will shift mass opinion towards action.)

Left Behind: As Fewer Americans Identify with GOP, “Republicans” as Measured in Polls Appear More Resistant to Changing Their Views on Science

As I have detailed at Framing Science many times, over the past five years, as Democrats and Independents have shifted their views in support of embryonic stem cell research and […]