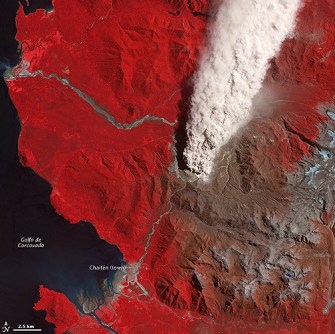 It is hard to believe that the eruption at seem to come out of nowhere at Chaiten started over 8 months ago now, and apparently is still not showing many signs of abating. I did get a chance to see some great talks and posters at AGU last month about the Chaiten eruption, with the key points I took away being that Chaiten is erupting a very crystal poor rhyolite (<1% crystals) and that it seems that the source of the magma is relatively deep in the Andean crust. Also, there are some indications that the eruption at Chaiten may have been tectonically instigated – i.e., that earthquakes in the area might have helped the magma to erupt – at least that is what Luis Lara of the SERNAGEOMIN believes (hat tip to Thomas Donlon for the link). The eruption at Chaiten also wreaked more havoc on aviation in South America than we thought, effecting airports 1000s of kilometers away and almost bringing down a number of aircraft. Most everyone I talked to seems to think what we are seeing is very similar to what happened at Little Glass Mountain in California about 1,000 years ago.

Moreover, the eruption hasn’t really stopped since it began in May of 2008. In fact, just last week we saw a collapse of part of the new dome that have produced some pyroclastic flows within and outside the caldera (see above and the Volcanism Blog) and fed more ash into the choked rivers near the volcano. It is anyone’s guess (well, at least at AGU) how long this eruption might go on – weeks? months? years? – but the consensus is that this might be a once-in-a-lifetime eruption (but we already knew that, didn’t we?)