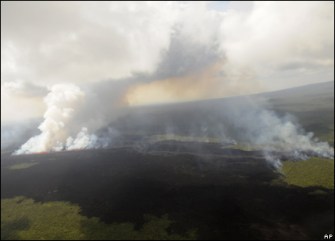 I had been looking for some pictures of the recent eruption of Cerro Azul in the Galapagos, and finally I found some posted on the BBC. There are some rather stunning pictures of the rift eruption (#3), the lava flows heading downslope (over older lava flows, #4) and even a little lava spatter (#1).