Quick post (Department commitments now), but in an attempt to get comments working again, I’ve opened this new thread. I’ll inquire about the problem with the comments – my guess is we either maxed out the commenting on a single post or the spam filter is being over aggressive – either way, I’ll try to get it fixed asap.

The brief news on Merapi is bad – pyroclastic flows have killed at least 28 people who didn’t get a chance to escape. This is consistent with the reports of burns on many of the victims – the seering gas and ash from the pyroclastic flows will do that, even if you’re on the periphery of the flow (if you’re in the middle, you’re dead). From what I’ve read, the pyroclastic flows were generated by a dome collapse at the summit crater and funneled down the channels on the south side of the volcano. Much of the area and many homes (see below) have been covered in ash as well. There is video of the destruction as well, but be warned, it is graphic. It is also hard to believe that people are already trying to return to their homes on the volcano. Reports today suggest Merapi has settled down some, but is still highly danger – for more details check out the comments from Eruptions readers on the previous Merapi post. 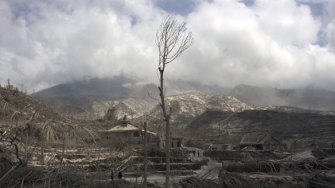 While coal has long supplied energy to the Navajo tribe in Arizona, new inspiration and political will is calling for renewable energy to build the society’s future.