One day, quantum computers may replace the standard silicon chips found in all computers around the world. In fact, by 2020 to 2025, transistors will be so small and will generate so much heat that standard silicon technology (and Moore’s law, which states that computer power doubles every 18 months) may eventually collapse. Silicon Valley could become a new Rust Belt in 10 to 15 years, with profound implications for the world economy. Who will want to upgrade their computers and buy new products if computers are just as fast today as they were last year?

In some sense, they are the ultimate computer. In fact, quantum computers in principle can crack difficult codes that may take a standard digital computer centuries to solve. Quantum computers, however, are notoriously difficult to build, because individual atoms have to vibrate in perfect unison (i.e. they have to be coherent). The slightest vibration, interference, impurity, etc. can destroy this delicate coherence and ruin the calculation. Because of the decoherence problem, so far the world’s record for a quantum computer calculation is just 3 x 5 = 15.

But progress is being made every day in quantum computers. Researchers at an IBM research facility (Almaden Research Center) in Zurich, Switzerland have had a busy week thus far. Researchers there made two discoveries they say represent a major leap in the development of femtotechnology. If you haven’t heard of the field of study known as femtotechnology; It’s generally a term that is used by some futurists to refer to structuring of matter on a femtometer scale (dealing with elements that are less than 1/1000th of a nanometer in scale). Their first announcement stated that the researchers had successfully measured how long a single atom can store information. Just three days later, the researchers announced that they had successfully snapped a picture of a single atom by trapping a single atom inside a tractor beam.

(Technical Note: Using a modified version of a Scanning Tunneling Microscope (STM), a technology that was originally devised in 1981; scientists have confirmed that it’s now possible to observe things on a scale never before seen. Using a brand new technique called the “pump-probe” has allowed them to detect how the orientation of an atom’s magnetic movement evolves in time. One of the researchers; Sebastian Loth states “When objects shrink down to the nanoscale, physical effects tend to speed up, To explore the fast processes in individual nanostructures, scientists need a tool that can keep up in speed.” We can now see things in real-time and on the atomic scale. 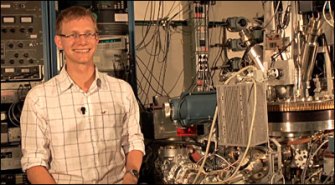 The new alternating voltage pump-probe technique has allowed them for the first time to both record and visualize the magnetism and dynamic processes of individual atoms. Not only have they improved the system of visualization but they are also doing this at speeds 1 million times faster than we were previously able to do. This breakthrough allows for a major increase in that of image resolution and now offers the ability for us to examine exactly how long these individual atoms can retain information. Previously, scientists were always able to observe this effect in a time-slice of around one second which has of course limited our ability to take our research methods to the next level. The new IBM technique has decreased that very time-slice to one nanosecond — A substantial improvement that IBM believes will soon be widely employed by their research colleagues around the globe. This of course means that as more researchers start employing the technique, more advancements will follow.)

Do you see anything out of the ordinary in this photo of IBM’s modified Scanning Tunneling Microscope?

Look a little closer and you will notice an old can of Arizona Iced Tea which now serves as a housing that increases the vacuum inside the microscope.

Advancing technologies and game changers like these are going to open the doors for all sorts of new avenues while significantly improving previous ones. IBM is already claiming that its new technology will lay the groundwork for quantum computing researchers by giving them a new way to explore the feasibility of an entire new approach to quantum computer through atomic spins on surfaces. This new technology could also give rise to various applications in data storage as we will now be able to determine whether single atoms can hold data. Other fields of research and new engineering improvements that would benefit from this are things like storage-class memory systems and even photovoltaics or solar cells.

So when might we find quantum computer on our desktops? Unfortunately, no one knows. Although stunning breakthroughs have been made in manipulating individual atoms, there is still the stubborn decoherence problem, especially if we want to lash thousands to millions of atoms together into a single computing device.

So it may take many more miracles and breakthroughs, spanning decades, to make quantum computers come to life. But when this happens, it will change world history.