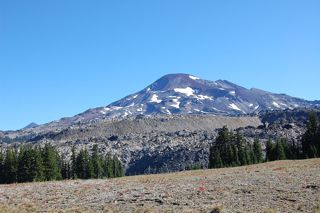 I am back from my trek through the Oregon and California Cascades – including stops at Lassen Peak/Chaos Crags, Hood, Three Sisters and Crater Lake (an added bonus). I’ll try to catch up on the volcano news I’ve missed and post on anything exciting that happened soon, but otherwise I’ll be posting new news as it occurs.

In the meantime, here’s a picture I took of Rock Mesa (foreground) and South Sister (background) taken from the Pacific Crest Trail. Rock Mesa is a ~2,700 year old rhyolite flow that appears to have erupted multiple pumices and has some impressive flow banding of the rhyolite itself. Enjoy!