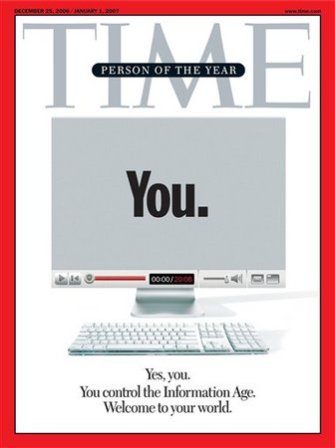 This week, Time magazine names all of us as “Person of the Year.” According to Time’s editors, in this Web 2.0 era of digital media, average netizens are transforming society in powerful ways, changing politics, community, and personal lives for the better.

“You control the media now!” declares Time in its cover feature. Here’s more of the mag’s hyperbole:

..look at 2006 through a different lens and you’ll see another story, one that isn’t about conflict or great men. It’s a story about community and collaboration on a scale never seen before. It’s about the cosmic compendium of knowledge Wikipedia and the million-channel people’s network YouTube and the online metropolis MySpace. It’s about the many wresting power from the few and helping one another for nothing and how that will not only change the world, but also change the way the world changes. The tool that makes this possible is the World Wide Web. Not the Web that Tim Berners-Lee hacked together (15 years ago, according to Wikipedia) as a way for scientists to share research. It’s not even the overhyped dotcom Web of the late 1990s. The new Web is a very different thing. It’s a tool for bringing together the small contributions of millions of people and making them matter. Silicon Valley consultants call it Web 2.0, as if it were a new version of some old software. But it’s really a revolution. And we are so ready for it. We’re ready to balance our diet of predigested news with raw feeds from Baghdad and Boston and Beijing. You can learn more about how Americans live just by looking at the backgrounds of YouTube videos–those rumpled bedrooms and toy-strewn basement rec rooms–than you could from 1,000 hours of network television.

Time’s techno-cheerleading needs a strong dose of evidence-based thinking. It’s a task I asked my undergraduates to undertake in my Communication & Society course this past fall semester at American University.

As I posted a few weeks back, students were divided into teams and asked to research and write position papers on how the Internet may be changing, for better or worse, many dimensions of society. Everything from politics to dating were fair game. The students then posted their papers here at Framing Science, and engaged in a week long blog debate, the results of which you can read here and here. More than a 1,000 readers logged on to the two postings, generating several dozen comments.

Read the Time magazine article and buzz over to the blog debate for some evidence-based context.

THEN check out this wonderful satirical essay offered today by NPR All Things Considered contributor Bill Langworthy. Hats off to Bill.