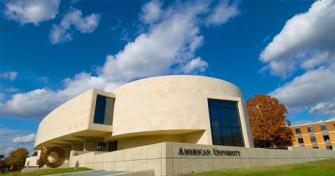 The Katzen Arts Center on the American University campus will be host to a discussion of the civic and personal challenges that college students face on climate change.

Here’s a head up on a very timely panel and forum to be held here at American University on February 9th and to be broadcast live on NPR affiliate WAMU. If you can’t attend, the broadcast will be archived at the WAMU site. More details will be forthcoming, including a social media site where forum attendees and listeners can weigh in with their comments and feedback.

The Climate Change Generation: Youth, Media and Politics in an Unsustainable World

Sponsored by the School of Communication at American University

Policy action on climate change remains politically gridlocked in the United States and throughout the world, while polls show that Americans remain divided about the causes of climate change and the urgency of the problem. For Americans under the age of 30, climate change may prove to be their generation’s greatest societal challenge. How are young people responding to climate change, and what role do the media and universities play in preparing the next generation of citizens to actively participate on the issue?

Richard Gallagher Steps Down as Editor of The Scientist

After nearly 8 years as founding editor of The Scientist magazine, Richard Gallagher is stepping down to pursue new journalistic ventures. Gallagher helmed The Scientist as it grew into one […]