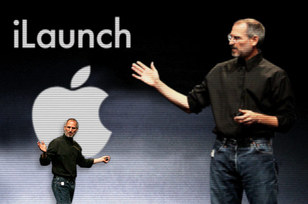 “…Today, Apple is releasing a piece of

innovative new technology that will forever change the way innovative

The iLaunch, as the new product is called, was then raised up from

below the stage, prompting the audience of technology journalists,

developers and self-professed “Apple fanatics” to burst into a

“Get ready for the future of product introduction,” said Jobs,

looking resplendent in a black turtleneck and faded jeans. “The iLaunch

will be able to make announcements from this, or any other stage,

the product. Voice-recognition software, Apple’s most advanced to date,

can recite a speech highlighting the features of the device while

injecting several clever digs at competitors. Should a product

demonstration experience a glitch or malfunction, the iLaunch boasts a

complex algorithm that can automatically produce humorous and

Described in its patent filing as a “hype-generating mechanism with

fully integrated Mac compatibility,” the iLaunch is powered by Intel

In addition, the iLaunch automatically saves discussion of a significant product feature for the end of the presentation, to “surprise and

delight audiences,” along the lines of a typical Steve Jobs presentation. Any iLaunch-powered presentation, of course, must come after months of rumors and whispered speculation that the product will be “huge” and “change everything.”

[image: Steve Jobs and the iLaunch]