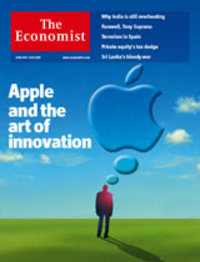 It’s time to prepare yourself for a deluge of Apple innovation articles over the next two weeks, timed to coincide with the launch of the Apple iPhone. According to The Economist, Apple has four important lessons to teach other companies. First and most importantly, companies need to dispense with the “not invented here” mentality:

“The first [lesson] is that innovation can come from without as well asnwithin. Apple is widely assumed to be an innovator in the tradition ofnThomas Edison or Bell Laboratories, locking its engineers away to cooknup new ideas and basing products on their moments of inspiration. Innfact, its real skill lies in stitching together its own ideas withntechnologies from outside and then wrapping the results in elegantnsoftware and stylish design. The idea for the iPod, for example, wasnoriginally dreamt up by a consultant whom Apple hired to run thenproject. It was assembled by combining off-the-shelf parts withnin-house ingredients such as its distinctive, easily used system ofncontrols. And it was designed to work closely with Apple’s iTunesnjukebox software, which was also bought in and then overhauled andnimproved. Apple is, in short, an orchestrator and integrator ofntechnologies, unafraid to bring in ideas from outside but always addingnits own twists.

This approach, known as “network innovation”, is not limited tonelectronics. It has also been embraced by companies such as Proctern& Gamble, BT and several drugs giants,nall of which have realised the power of admitting that not all goodnideas start at home. Making network innovation work involvesncultivating contacts with start-ups and academic researchers,nconstantly scouting for new ideas and ensuring that engineers do notnfall prey to “not invented here” syndrome, which always values in-housenideas over those from outside.”