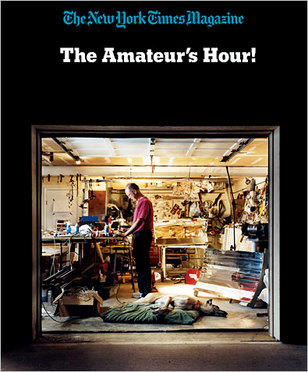 nOver the (very brief) July 4th holiday, I had a chance to catch up some innovation-related reading. This cover story in the current New York Times Magazine, for example, explains how amateurs are contributing to the future of space innovation. Thanks to the creation of a wide range of design contests sponsored by NASA, the U.S. space program has received a raft of new ideas to solve problems related to space travel, ranging from the creation of space gloves to the harder task of creating a space elevator. Enticed by the prospect of a $200,000 prize, for example, an out-of-work innovator in Maine decided to develop a state-of-the-art space glove while working in his garage and applying a little Yankee ingenuity:

“With NASA sponsoring seven design contests for everything from a newnlunar lander to a new space glove, anybody with a home-brewed inventionncould enter. [Peter] Homer’s previous jobs included some gigs in the aerospacenindustry as well as work sewing boat sails. So, Homer told me not longnago, he ruled out building a flying spacecraft but decided that “thenglove contest represented something of the scale I could achievenworking out of my home by myself.” He’d always been a garage tinkerer,nhe said, and being unemployed, he also wanted to prove to hisn14-year-old son “that you can do anything if you put your mind to it.”nOh, he added offhandedly, “the money is a motivator, too.” At stake wasna prize — presented with one of those giant cardboard checks — forn$200,000.

Last spring, Homer seized his family’s dining room, occupied his garagenand set out to build a better space glove for NASA. It doesn’t soundnlike the most glamorous task in the larger effort of conquering thenfinal frontier, or maybe even that big of a problem. But the spacenglove is fraught with little tribulations that, like a pebble in anshoe, can drive a space program half crazy. Because the air inside anspacesuit is highly pressurized, each time an astronaut flexes anmuscle, he has to overcome the suit’s resistance. It’s actual work. Andnwhen it comes to the highly articulated precision that is the humannhand, this means that the fine sinews are quickly exhausted and thenfingers brutalized by the effort.

As ever-more sophisticated tools of production move into the hands of average citizens, it’s likely that we will see more of this kind of innovative thinking emerging at the fringes of industries. For more on the rise of amateur innovation, it might be interesting to check out An Army of Davids: How Markets and Technology Empower Ordinary People to Beat Big Media, Big Government, and Other Goliaths from Glenn Reynolds (aka Instapundit).

We can never hope for a future with no problems. The solutions to problems create new problems, which in turn require new solutions, as WIRED founder Kevin Kelly explained recently.
Up Next
Guest Thinkers