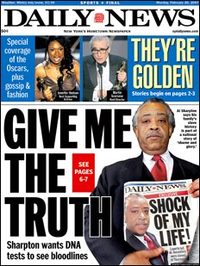 Mix together tabloid sensationalism in the world’s largest media market; the academic theory that any two people in the U.S. are linked together by, at most, six degrees of separation; and the current fascination with genealogical research powered by the Internet, and you get something like this… Over the weekend, the New York Daily News broke the story that Al Sharpton, the incendiary civil-rights

activist, is descended from a slave owned by

the relatives of the late US senator Strom Thurmond:

“In a revelation that will stun the nation, the

Rev. Al Sharpton, one of America’s most powerful black leaders, has

unearthed a shattering family secret – his ancestors were slaves owned

by relatives of the late South Carolina Sen. Strom Thurmond.

Anyway, throughout the article, Sharpton consistently refers to the news as “chilling” and “shocking” and “amazing” — and agrees to pose on the cover of today’s newspaper edition holding a cover of yesterday’s edition. In the fine print of the article, the New York Daily News notes that the study into Sharpton’s past was sponsored by Ancestry.com. What started as an innocent game of Six Degrees of Kevin Bacon has now been transformed into a game of political and media exploitation. What’s next, Hillary Clinton claiming that her ancient forbears were domestic house servants of the British during the Revolutionary War?

“The Business of Innovation” TV special

I’ve been glued to CNBC for the past two nights, trying to make sense of that unexplained global sell-off in the world equity markets that started in China and ended […]