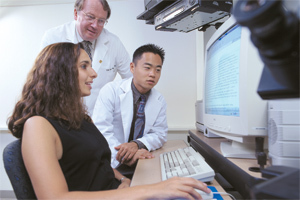 Through a process of serendipitous innovation, a team of biomedical researchers at the University of Rochester

Medical Center in New York may have discovered a new

. It turns out that what researchers originally thought was a “lab disaster” may actually be a new compound that breaks down the cell walls of tumors. The researchers will test the new compound for safety in the hope of developing it to treat cancers such as colon cancer,

esophageal cancer, liver and skin cancers. It all started when the researchers decided to use cancer cells instead of normal human cells:

Normal human cells are difficult to grow and study in the

lab, because they tend to die. But cancer cells live much

longer and are harder to kill, so scientists often use them. [Katherine] Schaefer was looking for drugs to treat the inflammation

seen in Crohn’s disease and ulcerative colitis, both of which

cause pain and diarrhea.

She was testing a compound called a PPAR-gamma modulator.

It would never normally have been thought of as a cancer drug,

or in fact a drug of any kind. “I made a calculation error and used a lot more than I

should have. And my cells died,” Schaefer said. A colleague overheard her complaining. “The co-author on my

paper said,’ Did I hear you say you killed some cancer?’ I said

‘Oh’, and took a closer look.” They ran several tests and found the compound killed

“pretty much every epithelial tumor cell lines we have seen,”

Schaefer said. Epithelial cells line organs such as the colon,

and also make up skin. It also killed colon tumors in mice without making the mice

sick, they reported in the journal International Cancer