There's No Place for Racism in the Final Frontier: Star Trek's Brilliant Episode on Discrimination

We Earthlings have lots of growing up to do before we reach the shimmering standard of equality set by Starfleet and the United Federation of Planets. 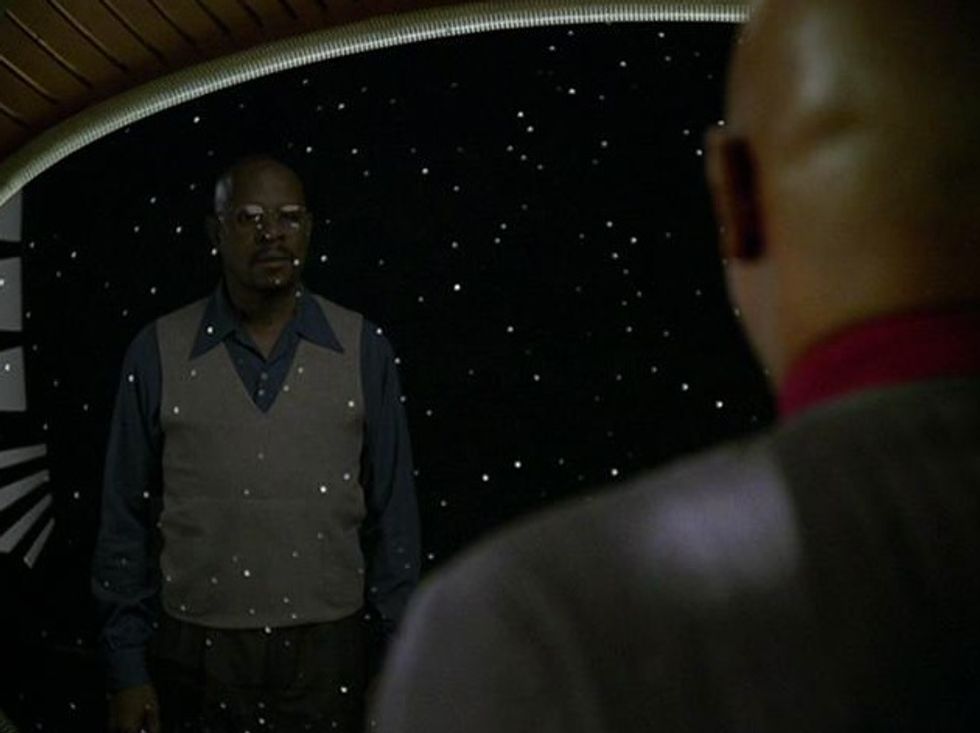 Star Trek has ever been a beacon for equality. In the sci-fi show's bold vision for a space-faring future, mankind is united. All of Earth's genders and races step out into the vastness of space together.

When the original series first aired back in 1966, such a future was difficult to grasp. Though the Civil Rights Movement opened a portal to equality through which our country walked, not everyone was transported. Individual minds are not as easily changed as laws. No doubt many were uncomfortable when an African American actress, the stunning and intelligent Nichelle Nichols, appeared on screen, not as a futuristic maid, but as Lieutenant Nyota Uhura. No doubt even more people were irked when she and William Shatner, better known as Captain James T. Kirk, shared what's popularly considered as the first interracial kiss on television.

Over Star Trek's six television iterations, there have been many episodes dealing with discrimination, but none perhaps so masterful and poignant as "Far Beyond the Stars." Appearing in the sixth season of Star Trek: Deep Space Nine, the episode sees Captain Benjamin Sisko, portrayed by Avery Brooks, fall into a coma of sorts. In an altered state of consciousness, he becomes Benny Russell, an African-American science fiction writer on Earth in 1950s New York City. There, Russell is inspired to write a science fiction story about a futuristic space station called Deep Space Nine, captained by a black man: Captain Benjamin Sisko. At first, the story is rejected by his editor, simply for the reason that the protagonist is black. "People won't accept it; it's not believable," he argues. "For all we know it could cause a race riot." But a compromise is reached: what if the entire story is just a vision, dreamt up by a "poor negro"? Excited to have his story published, Russell celebrates with his fellow writers and his girlfriend. Sadly, the compromise fails when the owner of the magazine decides to scrap the entire issue and fire Russell rather than publish his story.

The episode broke through when it originally aired back in 1998, because unlike other charming Star Trek episodes that dealt with social issues, this one did not employ metaphor. It was brutal, at least as much as primetime television would allow. At one point, Benny Russell is beaten by bigoted white cops, similar to how his story is later pulped. The "N-word" was actually used and uncensored, a rarity for the series and for modern American television in general. Russell's story does not end happily. It ends with him, mentally and physically beaten, breaking down and sobbing among his co-workers.

Keep in mind, it wasn't the mental beating and anguish of being fired and having his story turned down that spurred Russell's breakdown. Nor was it even the physical beating he endured earlier. No, it was fomented by years of pernicious, prejudiced flogging that, ever so gradually, wore away at his psyche. Ounce by ounce, veiled racism weighed him down, until he collapsed.

“What’s insidious about racism is that it is unconscious,” Avery Brooks later explained. “It’s in the culture. It’s the way people think." The only overt racism in the episode came from the two intolerant cops that beat Russell, the rest of it was concealed in institution.

"It's not personal, Benny," Russell's editor explained when Russell is told that he can't have his picture appear in the science-fiction magazine. The readers simply can't know he's black. That's just the way things are, and the way things have to be. Sexism also made an appearance in the episode. One of Russell's co-workers, a woman, had to use a man's name just to be published.

It was the same institution portrayed in the episode that -- back in 1967 -- attempted to thwartSamuel R. Delany, a distinguished science fiction writer, and yes, an African American. Just like Russell, when Delany submitted his novel Nova to John W. Campbell, Jr., the famous sci-fi editor for Analog Magazine, Campbell rejected it because he didn't feel his readership would be able to relate to a black character.

"It was all handled as though I’d just happened to have dressed my main character in a purple brocade dinner jacket," later remembered. "Purple brocade just wasn’t big with the buyers that season. Sorry..."

Too bad for Campbell, because Delany's Nova, would turn out to be a smash success.

Unlike what happened to Russell in "Far Beyond the Stars," Delany's experience ended happily. But, all too often, situations like those do not. We Earthlings have lots of growing up to do before we reach the shimmering standard of equality set by Starfleet and the United Federation of Planets. Eliminating racism is just as challenging as traveling amongst the stars. But if Star Trek is any portent, those two bright outcomes are inexorably linked. And just maybe, by the 24th century, they'll both be realized.