The Robotic Future is Fast, Cheap and Out of Control 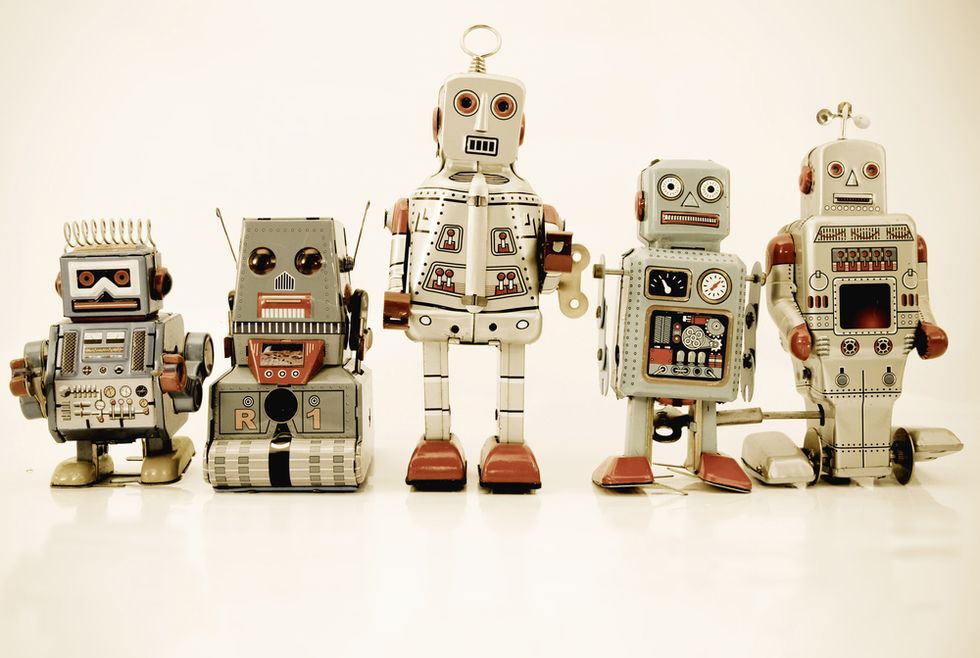 The robotic future is here, and it looks nothing like we thought it would. Instead of humanoid, highly-intelligent robots that do our bidding, the future is increasingly one of robotic swarms, robotic quadrotors, and tiny robots no larger than insects that perform surgery. The robotics revolution, in short, is fast, cheap and out of control. Just as the computer revolution started with massive mainframes and evolved to the personal computer and handheld tablets, the robotics revolution is taking the same path -- it is evolving from large, expensive industrial robots to vaguely humanoid robots to cheap, tiny robots that follow you everywhere, thanks to built-in swarm intelligence.

The latest example comes from Planetary Resources' breakthrough initiative for commercial asteroid mining, in which hundreds of robots working together would participate as part of a collaborative swarm to mine asteroids for resources. The presence of so many robots helps to ensure the success of the mission - think of each additional robot as a form of insurance policy that the mission actually gets carried out. This, in fact, is where the term "Fast, cheap and out of control" originally comes from. In 1989, robotics legend Rodney A. Brooks originally described a "robotic invasion of the solar system," in which researchers could avoid the prospect of a catastrophic mission failure with swarms of tiny robots:

"Complex systems and complex missions take years of planning and force launches to become incredibly expensive. The longer the planning and the more expensive the mission, the more catastrophic if it fails. The solution has always been to plan better, add redundancy, test thoroughly and use high quality components. Based on our experience in building ground based mobile robots (legged and wheeled) we argue here for cheap, fast missions using large numbers of mass produced simple autonomous robots that are small by today's standards (1 to 2 Kg)."

All of this, of course, flies in the face of conventional wisdom that future robots should look like us and think like us. Certainly, the story of the humanoid robot is a story that is easy to tell: it feeds into our notions that we are increasingly headed to a world where man and machine co-exist, where robots play a daily active role in all of our lives. Consider some of the stories that have appeared in just the past week: the robot stand-up comedian, the robot prison guards in South Korea, and even robot sex workers. All of these stories seem to suggest that it is just a matter of time before robots catch up to humans in intelligence.

But that misses the larger narrative arc.

Much as the computing industry progressed from a mainframe to a PC to a mobile stage, with each stage marking bigger improvements in computing power while shrinking in size, the robotics industry could be headed for the same trajectory. What this means is the day is coming soon when each of us could have teams of personal robots that follow us around in our daily lives, doing everything from cleaning our toilets to cleaning our arteries, and communicating with each other as part of swarm intelligence. That’s a radical idea, but no more radical an idea than that one day each of us would have a personal computer. Remember the skeptics who once doubted why anyone would ever purchase a personal computer.

What's interesting is that Rodney Brooks - the developer of the Fast, Cheap and Out of Control thesis - went on to become the creator of the Roomba and small-scale military bots. His latest company is Heartland Robotics, which has been attracting VC attention of late, and could be poised to announce a major new initiative in which robots are intelligent, aware, teachable, safe and affordable. And they will look nothing like us. As The Economist recently explained, this radical re-thinking of the robotics future could lead to innovations that had never before been considered. It's time to put all of those smartbirds and nanocopters to work. One example is a potential 3D manufacturing revolution, in which swarms of these robots take over 3D manufacturing processes and keep factories running 24/7.

The robotics future could look stranger than we ever thought. We’re used to thinking of robots as looking a lot like us – only a bit stranger and without any of the emotional baggage we humans carry around. Think of the new viral Prometheus trailer with David the Android. It's time to step out of that Uncanny Valley and into a future that's much different. The robots of the future will be fast, and they will be cheap. And they will be out of control.