Was Confucius a "Genius"? 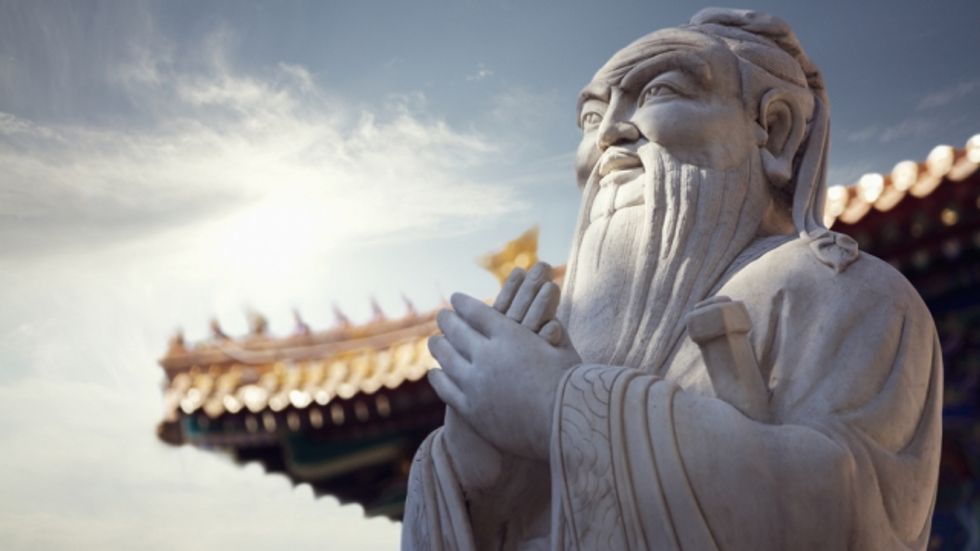 BEIJING - There are probably as many definitions of 'genius' as there are vain, successful people. Yet, not everyone who is vain and successful is a genius; in fact, many geniuses are quite unsuccessful. There exists, luckily, a reliable, philosophical tradition in Europe about what constitutes genius: It is not a person but a certain way of perceiving the world. Let's see if Confucius meets our criteria.

In his Konfuzius – Gespräche (1919), Richard Wilhelm translated shengren on two occasions as “Genie”; and, again, in the 1974 edition. It is an unusual translation that looked more like a compliment than a true synonym.

In European culture, according to historian Paul W. Bruno, genius is not necessary a person, but a spiritual guardian, or, as Immanuel Kant once said: a “GENIUS can also be explicated as the ability to [exhibit] aesthetic ideas”. In particular, a genius has taste (or is guided by it, either way), and to have taste is linguistically linked to Latin sapere (to taste, to have taste, to be wise). Semantically, then, genius is somehow related to sapientia and thus sagacity. An interesting association, but is Wilhelm’s “Genie” a good (albeit a one-time) translation or title for [Confucius] the shengren?

READ MORE What is the Difference between a Sage and a Philosopher?

To render the shengren as “Genie” seemed more like the advancement into sociology, because, technically, the concept of genius in the Western hemisphere had always been revolved around Anschauung (perception), in this case: how someone sees the world.

Compare the two following quotes from The Book of Mencius and Arthur Schopenhauer's The World as Will and Imaginations, which are very similar:

"The man who is truly great is one who does not lose his child’s heart." --Mengzi

The bright or clever child is curious and open-minded, and more importantly – unprejudiced. The mind of the bright child slowly diminished over the years, however, and, in the majority of people, extinguished, says Schopenhauer, during their “age of manhood, the Philistines incarnate.”

If someone were able to keep one’s childlike innocence; that one would truly be a very special, unique person: a genius. Genius was an evaluation and thus not an acceptable rendering of the word shengren, in the same way that genius was not an acceptable translation for names like poet, a writer, or a philosopher either.

But since genius was related to perception of the world, it clearly separated those with abstract knowledge (the mere scholarly, talented) from the few with intuitive wisdom (the spiritual, visionary). Here's another quote from Schopenhauer:

"Actually all truth and all wisdom ultimately lie in perception; but unfortunately perception cannot be either retained or communicated. [...] it rests just as much on subjective conditions that are not at everyone’s disposal and not at anyone’s at all times... [...] That books do not take the place of experience, and that learning is no substitute for genius, are two kindred phenomena."

This perception of the genius who sees a different world than all the others was not explicitly discussed in the Confucian canon, although it could always be induced, of course as in the above Mencius quote. In Confucianism, intuitive wisdom was a deeper understanding of the hidden mechanics of the world through the process of self-cultivation and guidance by rituals and moral conduct.

In Chinese genius is called tiancai -a person of extraordinary ability. In Latin, the word genius derived from ‘gen’, meaning to be born or to beget: “Genius functions as an attendant to one’s actions,” said Paul Bruno in his study of Kant's concept of genius. That would pose the question if the sages were born that way, or if sagehood made them that way. Confucius surely was attended by genius. But, really, he was a shengren.

This is a condensed version of a chapter on 'Das Genie (Genius)' from the manuscript Shengren.